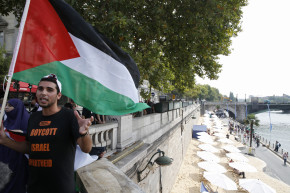 The "new law harms rather than helps," said the Anti-Defamation League

Some leaders of America’s Jewish community have slammed Israel’s new travel ban that singles out foreigners who have publicly called for boycotting Israel. The legislation passed Israel’s parliament on the same day that President Donald Trump announced his newest version of the Muslim travel ban.

“This bill will do nothing to deter the Global BDS Movement – indeed it hands them a victory,” said the liberal Jewish non-profit organization J Street. “The bill will further isolate the country, validate Israel’s critics and deny many people the opportunity to hear and learn from Israelis and Palestinians firsthand.”

The Israeli law was passed by a clear majority of 46 to 28. But it has received relatively little press in Israel, where the long deteriorated Left has struggled in recent years to grapple with the rise of the pro-settler Far-Right. That growing constituency has managed to advance legislation to prioritize Israel’s Jewish values over its secular, universal values. It has also been emboldened by Trump’s election. He’d signaled that he’ll give Israeli settlers a freer hand in expanding their presence in disputed territories of the West Bank and east Jerusalem. Israeli settlements in those areas are considered an obstacle to any peace agreement with the Palestinians by the international community.

The new law proves Israel “won’t turn the other cheek,” insisted Bezalel Smotrich, one of the bill’s sponsors from the ultra-nationalist Jewish Home party. Smotrich’s spokesman compared the legislation to Trump’s controversial travel ban, saying “without going into the policies of the [U.S.] president, every sovereign nation must set its policies in accordance with what is good for it.”

But many leaders in the American Jewish community say the law sabotages their mission to fight the boycott, divestment, and sanction (BDS) movement that has in recent years taken hold across American college campuses. The movement — a global campaign to place political and economic pressure on Israel so that it will end the occupation of the West Bank — has coincided with other fringe anti-Semitic movements that deny the Holocaust and call for the end of the Jewish State.

“We are deeply invested in fighting scourge of #BDS and delegitimization. This law doesn’t help,” the Anti-Defamation League, a New York-based Jewish organization that fights anti-Semitism domestically and abroad, tweeted on Wednesday. “Israel’s democracy, pluralism, open society serve as best defense against #BDS. New law harms rather than helps.”

Israel’s left-leaning daily Haaretz published a survival guide for travelers coming to the country post-ban. Legal experts said that while the interpretation will ultimately be up to the country’s liberal-leaning court system, they advised Jewish travelers to bring a letter from their local rabbi and for all travelers to book their flight during the week rather than on a chartered weekend flight.

But much remains unclear. That includes which individuals will be seen as having issued a public call for a boycott that has “a reasonable possibility of leading to the imposition of a boycott,” as the legislation reads.

The law is “virtually impossible to implement,” Yadin Elam, an Israeli attorney who specializes in human rights and immigration, told Haaretz. “Sure they have black lists, and they always have. But they also have gray lists. Are they going to start Googling every person on those lists who enters the country? Are they going to force every foreigner to pledge loyalty to the state of Israel when they enter the country or sign a form that they have never called for a boycott?”

The Israeli law comes as the American Jewish community is faced with a spike in anti-Semitic attacks in the form of bomb threats on Jewish centers as well as vandalism of Jewish cemeteries. Both President Trump and Israeli Prime Minister Benjamin Netanyahu have been criticized for their muffled responses to the growing phenomenon, leaving many to wonder if their reservation is connected to political interests.