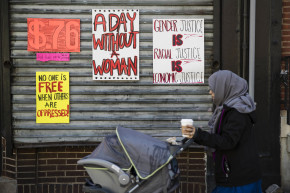 Was ‘A Day Without A Woman’ A Success?
By Allee Manning

Was ‘A Day Without A Woman’ A Success?

Some felt the strike would ignore economic injustice among women. They were wrong

As she hoisted her clapping two-year-old daughter up on her shoulders to get a better view of the sea of red attire worn by the hundreds of women and men (but mostly women) attending the “Day Without A Woman” rally in New York City, part-time educator and mother Cambridge Ridley Lynch made certain to underscore the reason she was participating.

“I know that as a stay-at-home mom I have the time available to me to do this,” she said. “This is no skin off my back. I’m very well aware of that. That’s why it was important to me to be here as part of the visual for the people who are not able to be here today.”

Less than three feet from her, a university professor striking from work who preferred not to give her name, held up a sign that succinctly stated “Striking For Women Who Can’t.” Those chosen to speak at the official gathering, such as Women’s March co-chair Carmen Perez, repeated that same sentiment several times.

Wednesday’s “Day Without A Woman” nationwide strike has received ample criticism for its potential to exclude or negatively affect low-income women, especially those of color. As some well-intentioned feminists noted, not every working woman is in a position to lose a day of income to go on strike or run the risk of getting fired. In fact, two-thirds of minimum wage workers in the U.S. are women, and women of color are disproportionately represented among this group.

The loudest criticisms of the “Day Without A Woman,” however, were likely misguided. They relied on the presumption that the strike’s intention and success relied on getting every woman in the U.S. to refuse participation in the workforce. However, the true mission of “A Day Without A Woman,” which coincided with International Women’s Day, was to “highlight the economic power and significance that women have in the U.S. and global economies, while calling attention to the injustices women and gender nonconforming people continue to face.” In other words, it was to support the very women who couldn’t join.

By that measure, the strike was a success. While some women did take the day off from paid or unpaid labor, organizers invited those of all genders to mark the day by wearing red and refraining from shopping, except at small, women- and minority-owned business. As could be clearly seen across social media, there were many ways to qualify as an active participant of the demonstration.

As a nurse I'll be wearing red 3/8 + keeping my wallet closed. #IStrikeFor the right to healthcare for all humans #DayWithoutAWoman https://t.co/VfQR8tQXUh

A great thread. I'll be wearing red as I can't afford to take off. ❤ https://t.co/mm7IqpFIp8

Some made a special effort to highlight economic injustice as a feminist issue.

As a woman of economic privilege, New Yorker Mandy Velez, a journalist, decided that the best way to support the women most affected by America’s economic disparities was to use her savings to “sponsor” any woman who wanted to strike but couldn’t for financial reasons.

“I didn’t think a strike without [low-income women] would be as effective considering that these types of workers are the ones who really make the day-to-day impact on the little things our country has (like food services or retail),” she told Vocativ in an e-mail. “While my taking off would help it wouldn’t really impact the nation financially, I wanted to sponsor a woman whose absence would be felt.”

Rather than striking, Velez said she’d spend the day interviewing three women who survived the Boko Haram kidnapping. She does not consider her sponsorship offer a political stance, but merely an extension of her support for the choice of all women to demonstrate. Though no one had taken her up on her offer, made on her own Facebook page, Velez received an anonymous donation to support it, which she plans to donate to a women’s cause.

According to Thea Sircar, a political theorist and visiting instructor at Macalester College, demonstrations like these have to be taken into account when considering the overall success of “A Day Without A Woman,” more than any count of women who stayed home from work today or refrained from making purchases.

“Success is not defined just by sheer numbers. It’s about the kinds of experiences people have at a protest, and the kind of relationships and possibilities that are opened up just by participating in some way,” she said. “A strike has an outward focus, but it also has an effect for those within the group and the kinds of solidarity, mutual sympathy or foundations for mutual aid that come out of the participation.”