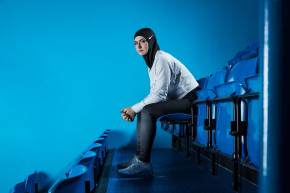 Nike is once again expanding its product line to be more inclusive. One week after launching a plus-size clothing line for women, the company unveiled a new performance hijab on Tuesday.

The “Nike Pro Hijab,” which will hit the market in spring 2018, is made from mesh for “optimal breathability” while still being opaque.

“The Nike Pro Hijab has been a year in the making, but its impetus can be traced much further back to Nike’s founding mission, to serve athletes,” Nike said in a statement. “The brand has underscored this commitment with the introduction of Middle Eastern stores, collections inspired by Nike’s roster of elite female athletes, women’s races, Nike Run Clubs and the NTC App in Arabic.”

The company said it developed this product over several years at Nike Headquarters in Beaverton, Oregon, where athletes described some of the issues of wearing a traditional hijab while performing. Athlete Amna Al Haddad, a female weightlifter from the UAE, one of the women cited in their statement, said that the veil often moved during her performance, making it hard to focus.

The announcement comes only weeks after the company released a viral video campaign that featured five Middle Eastern female athletes and a voiceover asking, “What will they say about you?” Despite the campaign’s intentions to convey a message that empowers women, many commenters then asked why Nike has yet to offer sportswear that accommodates the very women they’re trying to inspire. A source from Nike told Al Arabiya that this viral video campaign served as a “precursor” to the hijab launch this week.