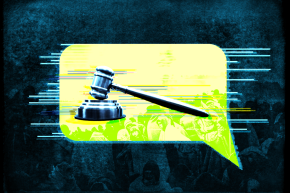 A robot lawyer is coming to their aid

Artificial intelligence chatbots on Facebook Messenger are typically annoying and not all that helpful, but that’s not the case with lawyer bot DoNotPay, which aims to help refugees claim asylum in the U.S., Canada, and the UK.

DoNotPay, created by 20-year-old Joshua Browder, first started as a project to contest parking tickets in 2016. But after making headlines and being approached by attorneys, the Stanford University computer science and economics student decided to expand its services and give free legal aid to refugees who are trying to fill out immigration applications.

Browder told Vocativ that he had been working on adding immigration services to DoNotPay for over a year now, but its functionality comes at an ideal time given the current political climate. He also found inspiration to do this because his grandmother is a refugee from Austria.

DoNotPay works by asking users a series of questions in order to determine which application they need to fill out and submit, which could either be the I-589 form in the U.S., the Canadian Asylum Application, or the ASF1 form for asylum support in the UK. All questions are presented without any legal jargon and in the most basic English so everyone can understand.

Information requested by the chatbot mostly asks things like when the person left their country and passport number, but they can choose to omit certain information. Browder said all personal information submitted by users gets deleted from his servers once the process is completed.

Browder’s bot is only available through Facebook’s platform right now, though its lack of certain security features isn’t ideal, he said. “I would love WhatsApp but unfortunately their platform is not open to developers. So as to what’s available it was Facebook since they have over 1 billion users,” Browder said. “I really do like Messenger but end-to-end encryption would be very helpful — apart from that, I really like the user experience.”

DoNotPay is currently only available in English, but Browder is working on adding Arabic and Spanish. The reason for adding Spanish is because he wants to eventually expand the chatbot’s services to other areas of immigration law, beyond refugee asylum.

In the past, Browder’s chatbot has helped people with bank charges, delayed flight compensation, finding public housing and contest more than 250,000 parking tickets in New York City and London. Browder hopes that along with expanding its immigration law fee aid, DoNotPay will also help people file basic divorce forms without having to dent their bank account.