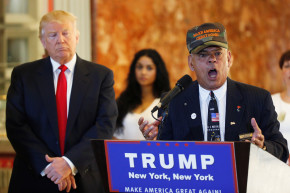 Update: Shortly after this article was published, Google removed the image from the Londonderry sidebar. The original is below.

Londonderry is a quaint New Hampshire town brimming with stately old churches, homes dating before the Revolutionary War, picturesque streets, and beautiful fall foliage displays, any of which the town would love to show off in the sidebar that appears when someone searches for the town on Google. Instead, a photo of a state representative’s wedding shows up, representing Londonderry with a shotgun-wielding bridal party.

The groom is Al Baldasaro, a Londonderry resident and Republican state representative. Baldasaro most recently made headlines last summer when, then serving as an advisor to Donald Trump’s campaign, he unapologetically said that Hillary Clinton should be “put on the firing line and shot for treason,” prompting a Secret Service investigation. He also criticized the family of Capt. Humayun Khan, who was killed in the line of duty, and tweeted a link to an article that alleged that Khan himself was on an “Islamist mission” when he was killed.

A few years before that, however, Baldasaro made the news after a photo from his 2013 wedding, which showed the groom in a tuxedo with his arms folded, four bridesmaids holding shotguns, and the bride armed with an assault-style rifle, was criticized by some of his Democrat colleagues. That story must have made an impression on Google’s algorithm, because the search engine picked it up as the best photo of Londonderry to use — much to Londonderry’s dismay.

According to the New Hampshire Union Leader, the town’s officials have asked Google multiple times to replace the image with something that actually shows off Londonderry’s other features, to no avail. A month ago, the town’s attorney sent a “formal letter” to Google’s attorneys requesting the same (he suggested an image of the high school’s marching band). Google has yet to respond to the latest request, nor did it respond to a request for comment from Vocativ.

The town council’s chairman, John Farrell, made sure to emphasize to the Union Leader that the issue isn’t that the wedding party is armed to the teeth (“This is the Live Free or Die state, and guns are prevalent … I personally do not find it offensive”) but rather that it isn’t a picture of the town. Other towns in New Hampshire get photos of outlet malls, main streets, and old mills as their default images, the newspaper pointed out. And other Londonderrys in America, a Google search shows, have photos of streets or maps as their default images.

Farrell also mentioned that Baldasaro was “very active in the recent campaign,” which is one way to put it, and that may have also contributed to his Google popularity. Another reason why one shouldn’t call for someone else’s death by firing squad or cast aspersions on a Gold-Star family and its fallen soldier son!

Baldasaro himself would also prefer that a different photo be chosen for Londonderry, telling the Union Leader that at the time his wedding photo was widely publicized, it was “a disgrace” and “hurt my children.” But Google’s algorithm has no feelings, and so the photo remains.