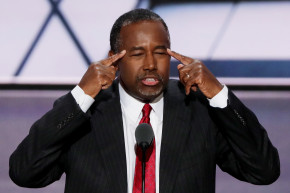 No, we can't zap our old memories back with electricity

Mere weeks after failed presidential candidate Ben Carson declared that he wouldn’t be qualified for a role in federal government, much less to head an agency, he accepted President Trump’s nomination to become the secretary of the Department of Housing and Urban Development (HUD).

So maybe it’s unsurprising that in Carson’s first public remarks as HUD Secretary, made to staff members Monday, he leaned on his qualifications as a former neurosurgeon instead. The results, however, were bizarre.

Caron’s remarks have already been harshly criticized on social media for suggesting that slaves brought over to America were the equivalent of immigrants who “worked even longer, even harder for less.”

But midway through his speech, filled with his trademark personal anecdotes in an attempt to inspire his new staff, Carson also took a moment to opine about the brain’s wondrous capabilities. Right after stating the very true fact that the brain has billions and billions of neurons, all capable of making innumerable connections to one another, Carson added that you could jumpstart it like a car.

“I could take the oldest person here, make a little hole right here on the side of the head, put some depth electrodes into their hippocampus and stimulate, and they would be able to recite back to you verbatim a book they read 60 years ago,” he said. “It’s all there, it doesn’t go away, just have to learn to recall it.”

Boy, that’s something. Where to start? For one, some scientists have indeed speculated that deep brain stimulation (DBS) — the invasive procedure Carson is gruesomely referencing — could improve people’s ability to recall and make new memories. But it likely would only help people with already poor memory caused by disease or trauma. And that might not be true either, considering a study published last December found that deep brain stimulation actually worsened volunteers’ performance on several memory tests.

Even if DBS, commonly used to treat tremors in people living with Parkinson’s disease, could someday treat dementia, though, it still couldn’t help you remember that Hardy Boys novel you read in third grade the way Carson describes it. Our long-term memories, physically represented by connected bundles of neurons, typically aren’t found in the hippocampus but are scattered throughout the brain. And some interesting animal studies aside, we still have no way to hone in on where a specific memory is, much less dredge it up with a few timely shocks.

Speaking of memory more generally, Carson is also absolutely wrong about how it works. Far from being a VCR tape of perfectly preserved recollections we can rewind back and forth through with enough training, scientists now largely think of memory as a ever-shifting calculation that our brain constantly performs, subject to all sorts of typos and glitches.

Though we’re pretty good at accurately remembering the gist of a past event or learned lesson, the minute details of a memory slightly change or fade away every time we bring it back to the surface of our consciousness — like taking the photograph of a photograph of a photograph. And under the right circumstances, we regularly recall things that never happened at all. Or if they did, they actually happened to our cousin.

Lastly, while our brains won’t overload from learning too many facts — another of Carson’s assertions made during his speech to illustrate how nothing is impossible with enough effort — they do have their limits. Learning a new language at the age of five is a snap, but trying to do the same at age 55 is usually much harder, partly because older brains have less possible new neural connections available to make. Studies have shown our brains are terrible at multi-tasking.

Of course, considering our President openly believes that climate change is a scam and vaccines are infecting kids with autism, having a brain surgeon and newly minted federal official brag that he can zap your memories back with electricity isn’t the end of the world.