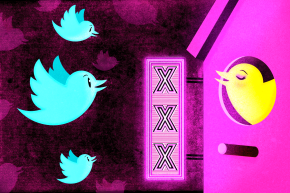 That’s why she joined OnlyFans.com, a new social media platform that has attracted hundreds of adult performers in the last couple months. The site mimics the look, feel, and function of Twitter, but with one major difference: you have to pay a fee to subscribe to people’s feeds. In Angel’s case, she charges $12.99 a month for fans to follow her feed and updates it several times a day with intimate explicit content that is often shot from home. Fans can also tip her for any video or photo they particularly like — and the money lands right in her bank account.

In the past several years, adult performers have flooded Twitter with free adult content — from naked selfies to explicit gifs to full-blown minutes-long clips — in an effort to, as the unbearable phrase goes, build their brand. It’s a familiar deal with the devil: in order to thrive in the new marketplace created by piracy and tube sites, they have to create yet more free content. But many began rebelling against that standard by setting their Twitter or Snapchat account to private and requiring fans to send a subscription fee through a cash app like Google Wallet.

Adult actress Jaclyn Taylor joined OnlyFans a month ago and has been steadily gaining a couple new subscribers a day — at $12.99 a month, that will ever-so-slowly start to add up. “I want it to be something a little bit more real and more personal,” she said. “I don’t want to be in full makeup for every scene I put up there. I want people to get a taste for my life at home.” It’s convenient that she also happens to be dating a fellow porn performer. “I’m inviting them, kind of, into our lives,” she said. “I think it’s the new thing.”

Dolly Fox, an adult model who independently sells her own custom video clips, has managed to collect more than 100 subscribers, and she’s charging an impressive $19.99 a month. Even more impressive is that she’s managed to maintain this fan base with the kind of content that she’s posting — the aftermath of several failed breast implant surgeries. Fox recently underwent an operation to go from 2,000 c.c. to 2,900 c.c. breast implants, but afterward, one of her implants ruptured. She had another surgery, but the implant ruptured again. Every step of the way, she has kept her fans, ahem, abreast of her news, including with recovery photos. Ahead of her latest surgery, she wrote, “Stay tuned, you’re on the first row. Thank you for the support so far, think about me tomorrow and pray to the God of Big Boobs.”

For many adult performers, like Fox, the upshot of OnlyFans is that they will no longer be posting explicit content on Twitter. “Why give it all away for free? Fans who are willing to pay deserve to get exclusives,” said Fox. “You still need to promote yourself to attract new fans, but that doesn’t need to happen with nude pics and vids. Actually, suggestive is more beautiful anyway.” Similarly, Taylor says she will be toning down her Twitter content. “I’m not going to post as much nudity or other provocative posts,” she said. “I’m my own brand, so I should be benefiting from these posts.”

But Angel says she will continue to post mainstream explicit content on Twitter. “I’ve tried not putting anything for free out there, and it seemed to just hurt my brand,” she said. “At this point if you put nothing for free out in the world no one will know who you are.” Her Twitter strategy is to put out content that gives away just enough, while still leaving fans wanting more — but she plans to reserve more personal stuff for OnlyFans.

This might all seem like bad news for performers — that they have to find new revenue streams on top of mainstream work that used to be sustaining — but Angel sees it very differently. She routinely notices performers updating their paid social media accounts, whether it’s Snapchat or OnlyFans, and use sites like SextPanther during downtime on set. That means a performer can make $500 on top of whatever they are getting paid for the shoot, Angel estimated. “There are hundreds of ways for performers to make money outside of performing,” she said. “It’s definitely a great time to be a performer, there are so many avenues to brand yourself that weren’t around when I first got into the industry.”

Things are more difficult for producers, most of whom are unable to take advantage of these new revenue streams. As Angel puts it, they “don’t have the luxury of being able to put their boobs” on OnlyFans. She added, “I’m just trying to capitalize wherever I can.”