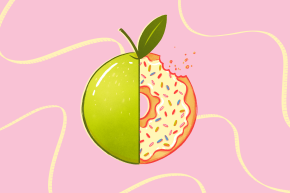 And that might not necessarily be a bad thing

More than two-third of Americans are either overweight or obese, and new research suggests many are increasingly fine with staying that way.

Researchers studied data from an ongoing, nationally representative survey of Americans’ eating and lifestyle habits, specifically looking at people who responded to a question asking if they had attempted to lose weight during the past 12 months. The percentage of overweight and obese adults who answered “yes” had steadily declined over the past 30 years, the authors found, even as the percentage of overweight and obese adults likewise rose.

The changing trends suggest that, at the very least, Americans’ perception of their own weight has gradually shifted in response to rising obesity rates, senior study author Dr. Jian Zhang, an epidemiologist at Georgia Southern University, told Vocativ in an email.

“Paralleled with the increasing prevalence of obesity, more and more adults compare themselves with their friends, coworkers, neighbors with heavier body weight, to maintain a positive image of their own,” explained Zhang. This social comparison, according to a popular theory in psychology, allows some people to believe their weight is healthier than it actually may be, which then reduces the motivation to lose any.

From 1988 to 1994, for instance, 56 percent of overweight and obese people said they had tried to lose weight recently, compared to 49 percent of those asked between 2009 to 2014. And the drop was most significant among black women, the group of Americans who have seen their levels of obesity rise highest in recent years.

But perhaps the leading reason why Americans are giving up on weight loss is our collective realization of how futile it often is, Zhang said.

“It’s hard to drop pounds, it’s painful, many of us tried and failed, failed and tried, and finally failed to try any more,” he said. Indeed, the vast majority of attempts will undoubtedly fail, or if they do succeed, only do so for a short time. And some research has shown this constant cycle of losing and regaining weight may itself be bad for our health. Currently, bariatric surgery is the only reliable way to lose weight, though it doesn’t come without its risks.

More The Dark Side Of Weight Loss Surgery

Deb Burgard, a California psychologist and advocate of the Health at Every Size movement, a collaboration of health care professionals, academics and patients who believe a healthy lifestyle can be achieved without focusing on a person’s weight, thinks our growing hesitance to play the weight loss game could be seen in a positive light.

“As an eating disorders specialist, I work with people across the weight spectrum who are harmed by the prescription of weight loss,” she said in an email. “That more people are aware of the unsustainability of trying to lose weight is only a problem for the weight cycling industry and the pharmaceutic industry.”

Zhang, for his part, agrees that explicitly focusing on reducing obesity is a fool’s errand for doctors and patients alike, though he does still consider it a public health priority.

“You cannot stop a train. The problem is hard to fix if it occurs, even identified early,” he said. “The best way, most likely the only way, is to prevent it from happening. Let’s do more to prevent obesity at its beginning, among kids, at home and in school. That is the right-time-right-person-and right-place strategy.”

And even those of us worried about our weight now shouldn’t obsess about the actual number on the scale, he added.

“I firmly believe we don’t have to lose weight mindfully; building a healthy lifestyle and having it as a part of routine is the key. This will make your effort less painful and more effective,” he said. “My definition of a healthy lifestyle is very simply — eat less and keep moving, period.”