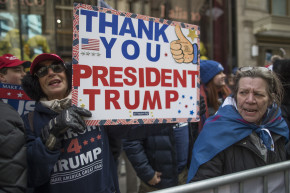 Donald Trump’s supporters on Saturday took to the streets of Berkeley, California, and dozens of other cities across the country to march in favor of the president and free speech. The Berkeley event was organized partly in response to a February episode on the famously liberal campus, in which anti-fascist protests against conservative firebrand Milo Yiannopoulos turned violent.

Berkeley’s “March 4 Trump,” one of three events planned in California, kicked off at 2 p.m. PST. Only about 200 participants were anticipated, according to its Facebook page, and a reporter on the scene estimated that around 400 people — evenly split between marchers and protesters — attended the march. Scuffles between marchers and protesters broke out early, after a pro-Trump marcher punched a protester. Observers posted photos and videos of the violence to social media.

Punches are thrown at the #March4Trump protest in Berkeley, some push crowds back from one another. pic.twitter.com/RdLaFLgBUp

In response, people protesting the march led “Out of Berkeley!” chants.

"Out of Berkeley!" chants in response to another fight #March4Trump pic.twitter.com/41ycPfF32T

But while the event was billed as a march for the 45th president, organizer Richard Black, a self-described libertarian, said it was also march for freedom of speech and to send a message that the mayhem that broke out in Berkeley on February 1 will not be tolerated. Black-clad anti-fascists responded violently to fans of Yiannopoulos, who was supposed to deliver a speech on campus that was eventually canceled.

“This is a response to those who had their first amendment rights sort of physically stripped from them that day,” Black told us in an interview on Friday. “They were kind of forced out of the school and physically assaulted by those on the radical fringe left, who have sort of been terrorizing campuses all over the U.S. by shutting down these lectures and limiting free speech and open discussion and open discourse.”

Although counter-protest organizers previously said there was a possibility that white nationalists would join the march, Black insisted that his march was not organized to spread a message of hate and that it attracted a diverse group of people.

“That’s the thing I have to keep reminding people: this isn’t so much liberals versus conservatives, and so on and so forth,” he said, adding that some in the Bay Area smeared the march before it even began. “We have communist-oriented media sites saying we’re going there to provoke immigrants and harass minorities. It’s absurd.”

“This isn’t a protest, this is more of a celebration of our First Amendment rights. We want people to know that they cannot censor others,” she told us in an email. “Free speech has nothing to do with Trump at all, but more of an American standard as a whole. The U.S. was founded on our freedoms and radical lefts should not censor those who want to speak on a college campus and burn things when they don’t get their way.”

Zhu also dismissed the idea that the march was somehow connected to prejudiced groups, and accused members of the left of inciting more violence than right-wingers.

“We are not violent like how the lefts’ portray us to be. We have always had peaceful marches and events. Only the lefts make it violent. Antifa has been posting my photos around social media for people to target me and hunt me down because of my views,” she said. “When did being a conservative, supporting your president, and practicing our first amendment right make us alt-right and a white nationalist?”