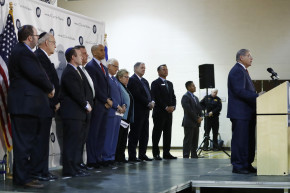 Responding to a wave of bomb threats against Jewish Community Centers across the U.S., the FCC is temporarily allowing them to identify callers via caller ID, regardless of whether callers try to block it.

Federal Communications Commission rules generally demand phone companies respect a caller’s request to block their numbers from showing up on caller ID. But calls of threats to Jewish centers have spiked dramatically since the 2016 election of Donald Trump. Such facilities have largely been helpless to fight back against threats without any way of identifying callers.

On Friday, citing such threats, the FCC temporarily prohibited calls to JCCs from using caller-ID blocking for an indefinite period, the agency said in a press release. The announcement comes on the heels of Sen. Chuck Schumer (D-NY) specifically lobbying the FCC to make this move.

Also on Friday, the FBI announced it had arrested a former journalist Juan Thompson for allegedly stalking a former girlfriend — charges which included making at least eight bomb threats to JCCs in her name. If found guilty, he still appears to have been behind only a small fraction of such calls, though, as at least 100 called threats have been reported since January.