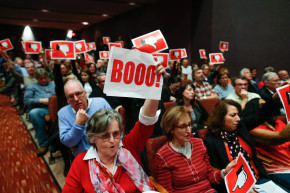 Why Political Science Needs To Get More Involved In, Well, Politics
By Alasdair Wilkins

Why Political Science Needs To Get More Involved In, Well, Politics

Six academics argue that their field is too far removed from our real, very messy system

By any measure, there’s something desperately wrong with modern politics, from issues of widespread voter suppression to the growing distrust of government from both the right and left. A group of political scientists argue that perhaps it’s time for their field to get out of academia and actually do something to rescue democracy from its many maladies.

According to the authors’ recent commentary in Science, political science for the past half-century has been a largely theoretical discipline, concerned with figuring out how politics works instead of considering how it ought to work.

That wasn’t always the case. Political scientists in the first half of the 20th century regularly offered policy recommendations on how to counter rising fascism. By the researchers’ own count, about a fifth of all political science papers published in the years immediately after World War II had such suggestions. Today, the figure is less than one percent.

The authors, a team of six from universities including Ohio State and Harvard, aren’t looking to put political science to work in service of a particular party or ideology. Rather, the goal is to improve the health of the overall political system. Part of that is recognizing that treating politics as a subject of abstract academic study can have unintended consequences that further undermine democracy.

“It is one thing to forecast an election and another to engender engagement with voters and warrant trust in those elections, whatever the outcome,” they write in Science. “It is one thing to identify ways to increase voter turnout; it is another to do so without inadvertently exacerbating existing inequalities in turnout, or inviting abuse by interested campaigns or third-party actors.”

One of the first recommendations the political scientists make is to shift how lawmakers engage the public. Instead of having elected officials ask constituents what they want, the question should be phrased as “What should we do?”, inviting people to engage in deliberation over policies. The authors point to online town halls they organized in 2015 between congresspeople and a randomly selected group of constituents. Instead of just including people who most often attend town halls — which tend to be those with the strongest, most polarized opinions — these brought a more diverse set of views and perspectives, with both the politicians and the citizens reporting they felt they had moved past the normal talking points.

The researchers are quick to stress that this isn’t meant as a panacea for our current political mess — and even the town hall idea would require more research. But that’s the point: Political science has generally shied away from such research, leaving the discipline unable to offer any real recommendations about how we might improve our politics. In this polarizing time, it’s worth considering anything that might prove useful in building a better (or, you know, an even barely functional) democracy.