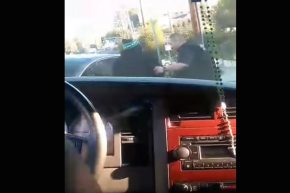 ICE Agents Nab Father While Dropping Daughter Off At School

His 13-year-old daughter, who filmed the incident, can be heard sobbing as he is handcuffed and placed in an unmarked car

Immigration authorities detained an undocumented father of four U.S.-born children as he was driving to drop off one his daughters at school in southern California, video obtained by the website LAist shows.

Immigration and Customs Enforcement agents pulled over Romulo Avelica-Gonzalez, 48, a few blocks from his 13-year-old daughter’s school in Los Angeles’ Highland Park neighborhood on Tuesday. The arrest of Avelica-Gonzalez, a Mexican immigrant who has lived and worked in the U.S. for more than two decades, was confirmed by his attorney, Emi MacLean.

The video was captured by Avelica-Gonzalez’s daughter, who used a cell phone camera to film the incident, according to the family. The young girl, who was in the family’s vehicle with her mother, can be heard sobbing as ICE agents handcuff and place her father into an unmarked car. The eighth-grader arrived at school later that same day in tears, staff from the school told LAist.

“Think about the horrific nature of that situation,” MacLean, a staff attorney for the National Day Laborer Organizing Network, told the New York Daily News. “It’s been really devastating for the family.”

Avelica-Gonzalez works as a food preparer at a Mexican restaurant and has lived in the U.S. for over half his life, his family said. MaClean said that he had a DUI conviction from nearly 10 years ago and a two-decade old conviction for driving an improperly registered vehicle. The lawyer added that Avelica-Gonzalez was granted a temporary stay on his deportation order and remains in ICE custody.

News of his detention comes as ICE arrests around the country continue to generate headlines following President Donald Trump’s orders to crack down on illegal immigration. Last week, federal authorities attempted to place an immigration hold on a 25-year-old “Dreamer” after he was jailed in Texas over a pair of unpaid traffic tickets. ICE officials arrested another young immigrant on Wednesday, just moments after she spoke out against deportations at a news conference in Mississippi.