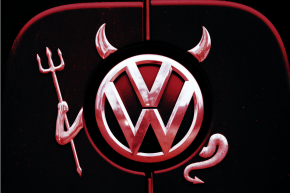 Volkswagen’s Emissions Scandal Could Cause 1,200 Early Deaths
By Allee Manning

The company's cheating is a public health disaster

Volkswagen’s illegal use of software to cheat vehicle air emissions tests has real-world health consequences. Now, Harvard and MIT researchers have estimated how much: Their cars will result in 1,200 premature deaths across Europe, a new study found. This is in addition to the 60 premature deaths that can be expected to occur in the U.S. because of Volkswagen’s fraudulence.

According to the estimate of these scientists, whose work will be published in the scientific journal Environmental Research Letters, this figure accounts for people whose deaths will occur up to as much as a decade early. The main countries affected are Germany (where most of the cars were sold), Poland, France, and the Czech Republic.

“[Pollution] doesn’t care about political boundaries; it just goes straight past,” study co-author and MIT professor Steven Barrett said in a press release. “Thus, a car in Germany can easily have significant impacts in neighboring countries, especially in densely populated areas such as the European continent.”

In order to get to this figure, the researchers looked at the average emissions per compromised vehicle on the road, using historical data to estimate how much each car drove and where. Those calculations were then translated to increased risk for dying early among the affected population. They specifically accounted for increased risk of dying of diseases linked with air pollution, such as asthma and COPD.

While Volkswagen executives are beginning to pay the price for the auto manufacturers in both $4.3 billion in fines and criminal charges for responsible execs, there is still more work to be done. The researchers also estimate that an additional 2,600 premature deaths in Europe will occur unless Volkswagen recalls and retrofits the rest of the affected vehicles by the end of this year.