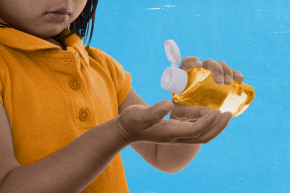 And at least some are doing it on purpose

The thought of gulping down hand sanitizer is enough to trigger most anyone’s gag reflex. But according to a new report from the Centers for Disease Control and Prevention, there are tens of thousands of kids in the U.S. who do just that every year.

Sifting through the National Poison Data System, which records cases reported to the country’s 55 poison centers, researchers calculated that just over 70,000 accidental exposures to hand sanitizers among kids younger than 12 had occurred from 2011 to 2014. The vast majority of these involved youngsters under the age of five who ingested hand sanitizer. And cases most commonly involved alcohol-based hand sanitizers. The CDC’s findings were published Thursday in the agency’s Morbidity and Mortality Weekly Report (MMWR).

Thankfully, there were no reported deaths from hand sanitizer poisonings. And even symptoms were relatively rare, with only 11.6 percent of kids feeling sick after their exposure. Despite ingestion being the most common kind of poisoning, a third of kids who did become sick experienced irritated eyes, while 10 percent reported reddened eyes. Vomiting, irritated mouths, and stomach pain were some of the most reported symptoms for kids who drank it. The most severe cases involved five kids who fell into a coma, three who experienced seizure, and two who had difficulty breathing.

These severe cases were slightly more likely to happen with alcohol-based hand sanitizers, though there were little overall difference in the risk posed by either type. The fact that older kids were more likely to knowingly down the former, though, indicates that at least some were trying to get an alcohol buzz. Poisonings were also less likely to happen during the summer, likely because hand sanitizers were more plentiful during flu season and in schools, the researchers said.

Unlike previous years that saw a rise, the number of hand sanitizer poisonings does appear to have stayed level. But the authors stress parents should be aware of these products’ unique dangers and do their best to keep them out of their kids’ grasp when not needed. Better yet, they suggested, parents might want to avoid hand sanitizers completely and just rely on plain soap and water instead.