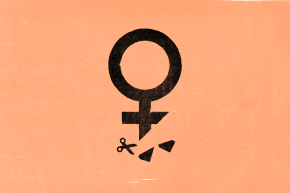 Labiaplasty Is Dramatically On The Rise In U.S.
By Tracy Clark-Flory

Labiaplasty Is Dramatically On The Rise In U.S.

Women are increasingly asking doctors to surgically alter their labia, according to a new report from the American Society of Plastic Surgeons. In 2016, there were more than 12,000 labiaplasties performed — an impressive 39 percent increase from the previous year.

“As cosmetic procedures become more common we are seeing more diversity in the areas of the body that patients are choosing to address,” said Debra Johnson, president of ASPS, in a press release. “Now patients have ongoing relationships with their plastic surgeons and feel more comfortable discussing all areas of their body that they may be interested in rejuvenating.”

That makes it sound so positive — diversity, comfort, rejuvenation. But, really, what she’s saying is people are finding more and more faults with their bodies, including their genitals. Labiaplasty typically involves the surgical removal of part of the labia minora. Sometimes, the procedure is necessary because of physical discomfort, but it’s often strictly cosmetic.

More Doctors Warn That Teen Labiaplasty Is On The Rise

The data show that there were 9,138 labiaplasties reported to ASPS member surgeons in 2015, compared to 12,666 in 2016. That increase might seem to suggest a troubling trend, but ASPS only started tracking labiaplasty in 2015, so the data give a limited snapshot of the issue. But a previous report from The American Society for Aesthetic Plastic Surgery — a different organization — found a 16.1 percent rise in labiaplasties in 2015 (they only started tracking it the year prior). Doctors have also warned of a notable increase in the procedure among teen girls, and the American College of Obstetricians and Gynecologists has come out with guidelines for how physicians should address these cases — namely, teaching young women that not all labias look alike.

Typically, the rising popularity of labiaplasty has been blamed on pornography and barely-there pubic grooming trends — and Johnson does note in an interview with USA Today that “nowadays with so many women waxing and shaving, they are just much more aware of what they look like, and so sometimes they feel self-conscious.”

But she also implicates a new suspect: the internet. “Many times a person will start with a Google search to see if anyone else out there has the same problem, and you have a whole cadre of people who have the same concerns,” she said, “and it allows you to hear about other stories and what they did and their experience.”