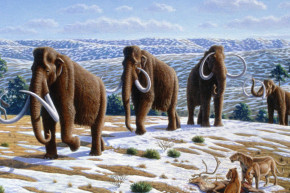 The Genomes Of Earth’s Last Mammoths Were An Absolute Mess

Mammoths survived until 3,700 years ago, but the end may not have been pretty

Woolly mammoths weren’t simply creatures of the ice age, giant beasts wiped out 10,000 years ago by a changing environment and human hunting. In fact, the last mammoths, surviving on a remote Arctic island, died out only 3,700 years ago. But new genetic research suggests it may not have been a pleasant existence for these last survivors, with the population experiencing “genomic meltdown” before extinction.

Located off the northeastern coast of Siberia, Wrangel Island was home to about 300 mammoths. Such a small population would need regular migration from the mainland to keep it genetically viable. Otherwise, inbreeding would mean any negative or dangerous mutations that popped up would likely be there to stay. Considering the island is 87 miles from the Siberian coast, mammoth reinforcements would have been unlikely even before the mainland mammoths died out. And once that did happen, the Wrangel Island mammoths hung on for 6,000 years as the species’s last, isolated outpost.

According to researchers at the University of California, Berkeley, the genomes of those island mammoths looked very different from their mainland ancestors. Comparing a 4,500-year-old specimen with one from 43,000 years ago revealed that the later mammoths had lost several genes involved in the sense of smell, compromising their ability to detect certain odors. They had also lost the genes for some proteins normally found in their urine, which might not sound like the biggest deal but would have played an important role in determining social status and potential mates. Other mutations might well have turned their fur into a strange, translucent satin coat.

Scientists, writing in PLOS Genetics, can’t say for sure why these genetic changes occurred. It’s possible that, in an island environment that lacked predators, once useful genes were no longer that necessary, or that the tiny population meant that unusual variations and random mutations would remain in the population. Once rare genetic diseases might have been a problem for the mammoths, hastening their eventual extinction.

The researchers argue these results are particularly important for conservationists to keep in mind, whether they are trying to keep similarly large mammals like the Indian elephant from going extinct or actively seeking to bring mammoths back from the dead with nifty genetic manipulation. The Wrangel Island mammoths did all right for themselves — 6,000 years of lonely survival is nothing to sneeze at — but this study suggests just how hard it is to keep a population alive for long when its numbers are so few.