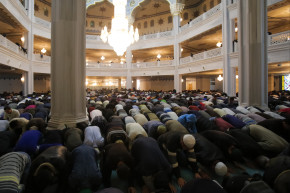 Muslim vigilantes are posting online videos of themselves attempting to enforce Islamic law on other Muslims they meet in the streets of Moscow.  Calling their movement “Stop Haram,” the activists record themselves ordering people to stop smoking cigarettes and drinking alcohol, chiding them for what they call un-Islamic behavior. Consuming alcohol is considered ‘haram’ or forbidden for some Muslims.

A Russian Muslim called Islam Ismailov, the purported leader of the group, explained his actions in a video released last week, saying non-Muslim Russians see “our fellow believers, which they call themselves, violate the norms of morality and religion” by smoking and drinking, and that his group’s goal is to “try to convince them in the future not to do so.”

In the video Ismailov drives around Moscow and in one scene approaches a visibly intoxicated man holding a bottle of vodka. Asking him why he is drinking, Ismailov then berates the man, telling him that his problems are better solved praying rather than drinking. There are between 16 and 20 million Muslims in Russia.

Ismailov used to be a member of a well known group on YouTube called StopHam. That group would try to shame Russian drivers who drove onto sidewalks and parked there. The group’s English-subtitled videos have been viewed millions of times. StopHam distanced itself from Ismailov’s latest project, saying it had nothing to do with Stop Haram.

Russians commenting online criticized the activists, saying they were breaking the law, and doing it just for attention.

“Stop Haram go away! Tomorrow shorts will be unacceptable, the day after tomorrow – to be without a veil. I am so opposed to the bearded Islamists!”

“Stop Haram, according to journalists and bloggers – Sharia patrol, is nothing but a sort of show, which Islam categorically rejects.”

Members of the Public Chamber of the Russian Federation, the head of the Spiritual Assembly of the Muslims of Russia and Moscow’s Mufti Albir Krganov have also reportedly been critical of the Stop Haram project. They’ve said stopping people on the streets in order to enforce Islamic law is unnecessary, and may lead to hostility and aggression.