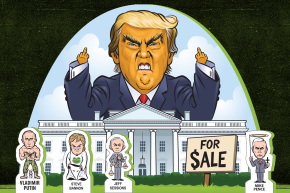 A laid-back lawyer from California, Pullman has spent the last four months feverishly concocting an amusing way to help Trump skeptics shake their feelings of despair. His brainchild came roaring into being on Wednesday: Basket of Deplorables — The Board Game!

“I call it game therapy for surviving the Trump presidency,” said Pullman, who specializes in criminal marijuana cases and whose San Rafael-based practice runs under the name Kick Ass Defense Lawyer.

Of course, there’s a slight catch. Pullman drained his savings to hire designers and to finish a game prototype, he said. Now he’s looking to raise at least $22,000 through Kickstarter to cover the cost of manufacturing. The crowdfunding campaign managed to drum up more than $2,000 in the first 24 hours.

Pullman describes Basket of Deplorables as a kind of mashup between Candyland and Trivial Pursuit. There’s also some charades-like role playing along with a healthy dose of political humor, he said.

The game takes place in a bizarre, dystopian future where Donald Trump — a tiny-handed reality television star — somehow becomes President of the United States. Players compete as Bernie Sanders, Hillary Clinton, Elizabeth Warren, or Barack Obama to take on Trump in the 2020 elections.

As these candidates make their way around the board — designed as a winding campaign trail — they enter debates, rack up endorsements, and compete in primaries. The players also seek to collect as many of the game’s 11 “Deplorables,” who include Betsy DeVos, Vladimir Putin, and Steve Bannon, among other high-profile Trump associates.

According to the game’s rule book, the winner at the end gets to flick a cutout of Trump with their middle finger, toppling him from his “rein of error.”

“People say it’s kind of cathartic to play,” said Pullman, who has run a few game tests among friends and colleagues. “To be able to laugh about our current situation can be really helpful for people.”

Pullman said he experienced his own kind of catharsis as he poured his time and energy into creating the game. A hardcore Bernie Sanders supporter, he said he had become “morbidly depressed” after the election and even struggled to get out of bed for a week. But coming up with the Basket of Deplorables helped pull him out of his slump.

Over the next few months, the game completely consumed him. Pullman said he turned down several law cases that came his way. And the game kept harshing his mellow during a week-long meditation retreat at the renowned Spirit Rock Meditation Center north of San Francisco.

“It was insane,” he said. “I ended up neglecting most aspects of my life, including cleaning my room and personal hygiene.”

The board game is not the first time Pullman has tinkered around with ambitious projects, he said. Late last year, he launched an online application that helps Californians reduce or eliminate prior marijuana convictions from their record — free of charge. Pullman also said he’s penned an unpublished manuscript entitled “Shut The Fuck Up: 30 Drug War Survival Tips.”

“I’m the kind of guy who gets these million dollar ideas all the time and does nothing with them,” he said. “It’s very out of character that I actually saw this one through.”