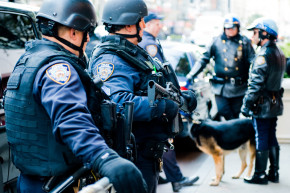 A new bill would make the next 'stingray' devices public before use within the NYPD, the nation's biggest police force

New York City is considering a bill to disclose police surveillance tools — a move that could hamper the broader practice of police around the country trying new snooping technology without public knowledge.

In theory, this would prevent the New York City Police Department, the largest in the U.S., from adopting surveillance tech in secret. Introduced Wednesday by Council Members Dan Garodnick and Vanessa Gibson, the bill, called the Public Oversight of Surveillance Technology (POST) Act, would require the NYPD to post a use policy for current and future snooping equipment it uses.

There’s major precedent for police keeping such new tech under wraps. Beginning as early as 2001, departments across the U.S. began using a device known as a stingray, named after an early model of such equipment, to track the locations of cell phones. Stingrays are portable and mimic a cell phone tower so that nearby phones connect to it. Police can then hone in on a location, and with some advanced models can intercept texts and phone calls. Use varies significantly: Some departments say they’ve never used theirs, while others, like the NYPD, use them frequently. In some cases, police don’t even bother with a warrant.

Law enforcement use of stingrays has notoriously been hard to make public, in large part because the FBI has required departments to sign confidentiality agreements about their use, and has even instructed them to drop charges in cases where bringing up stingray evidence is necessary to make a case. Turns out that’s a smart policy: In 2016, a judge for the first time openly condemned stingrays in court as a means to gather evidence on a suspect.

The NYPD began using stingrays at least as early as 2008, according to documents obtained by the New York Civil Liberties Union, and only a handful of departments are known to have acquired them before then. If successful, the POST Act could serve as a bellwether for which new types of technology are used by police across the country.

Privacy advocates like the NYCLU, which advised on the bill, praised it as a means of keeping what happened with stingrays, where police for years used a surveillance technology against citizens without their knowledge, from happening again.

“Our privacy laws are outdated, on the federal, state and local level,” Rashida Richardson, legislative counsel at the NYCLU, told Vocativ. “If we want to get in the place where we’re not constantly catch up with where the technology is going, then we need a better understanding of what’s out there and how it’s being used.”

Even today, stingrays aren’t regulated at the federal level, though the issue has finally achieved congressional attention. The House Oversight Committee published a study in December that outlined their use, and both the House and Senate introduced a bill to regulate them in February.