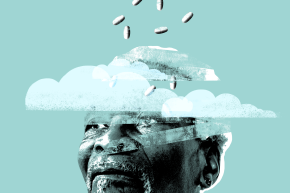 The Disappointing Story Behind The Latest Failed Alzheimer’s Drug

Yet another treatment crashes and burns

The race to a real breakthrough in treating Alzheimer’s disease continues to boast no winners, just fiery crashes near the finish line. The latest fatality is a biomedical company with a history of overhyped claims.

In late February, Colorado-based Accera Inc. announced that its experimental drug, AC-1204, had failed to pass its latest clinical trial. In a 400-person study that ran for 26 weeks, the drug proved no better than a placebo at improving the symptoms of volunteers stricken with mild to moderate Alzheimer’s. The failure was a disappointment to the company and patients after earlier research found hope in slowing down patients’ cognitive decline by a small but noticeable margin.

The poor showing is not only a stumble for Accera, a company that has spent nearly two decades attempting to tackle Alzheimer’s disease — but also for new Alzheimer’s drugs in general. Earlier in February, pharmaceutical company Merck reported that its most advanced hope for an Alzheimer’s drug, verubecestat, flunked its own FDA clinical trial, with results so disappointing that researchers ended the study early. Prior to that, another treatment from drug company Lundbeck came up short as well.

Each defeat is disheartening to the estimated 5 million people currently living with the disease. And that toll may triple by mid-century without any advances in treatment. “It’s been over ten years since the last drug for Alzheimer’s was approved. And there is a huge need,” James Hendrix, director of global science initiatives at the nonprofit Alzheimer’s Association, said.

Accera’s bad news is a particularly unique blow. While most every potential new Alzheimer’s treatment has its optimistic backers, patients and investors may have had unusual hope in Accera, founded in 2001, because its method of treatment veered from the traditional approach.

Though no one truly knows what jumpstarts the degeneration seen in Alzheimer’s, the leading theory today supposes that the disease is linked to the build-up of a brain protein called amyloid-beta — the so-called amyloid hypothesis. That’s why many experimental drugs have aimed to disturb the brain’s production of the protein to short circuit the disease. But the problem — which has led to a recent crisis in Alzheimer’s research — is that none of these drugs have succeeded past their first baby steps.

Accera came up with an alternative: Instead of going after beta-amyloid, the company instead theorized the disease was triggered by the brain’s inability to fuel itself by metabolizing glucose — an early documented effect of the degenerative disorder.

The basic premise behind Accera’s line of products is that they’re derived from caprylic acid, a type of fat found in sources as common as coconut oil. By digesting these fats, the company said, the body produces byproducts called ketone bodies, long known as the body’s last resort of stored fuel. And these ketone bodies could cross the blood-brain barrier and replenish starved brain cells. The idea was that this restoration would then hold off or even reverse losses in people’s cognition.

In 2009, the company’s first product, Axona, was sold as a prescription medical food, a designation that requires FDA approval for safety, but not strong evidence of effectiveness. Prior to Axona’s release, the company had only gotten somewhat encouraging results from its pilot studies. For instance, their largest randomized controlled trial of 100 volunteers showed that Axona patients had on average slightly improved in cognition by day 45 compared to a control group. But these differences faded away by day 90, meaning the trial had actually failed to meet its pre-set benchmarks, and it was only patients who lacked a certain genetic mutation who saw the benefits.

By the time it had sold a major stake to Swiss food giant Nestle SA in 2012, the company said that Axona had been prescribed to some 30,000 Alzheimer’s patients, while featuring isolated case studies of users on its website. The company even began to test whether their products could help people with other brain disorders, like multiple sclerosis.

But in December 2013, the FDA issued a warning letter to the company, blasting Accera for having misbranded Axona. The agency criticized the company for labeling Axona a medical food, pointing out that there are “no distinctive nutritional requirements or unique nutrient needs for individuals with mild to moderate Alzheimer’s disease.” And the letter added that any real novel benefits Axona could offer patients would have to be proven via the standard new drug approval process.

In May 2014, Florida lawyers referenced the FDA’s letter in filing a class action lawsuit against Accera, claiming customers had been defrauded by the company’s marketing. Plaintiff Sandra Goldfarb, suffering from dementia and under her husband Max’s care, had been recommended Axona by a doctor listed on Accera’s Speaker’s Bureau, according to the initial complaint. At $70 a bottle, the complaint further alleged the company had profited millions from deceptive practices.

“I used it [to treat my wife] because I thought it was going to be beneficial. But I don’t know whether it was or wasn’t,” Max Goldfarb, himself a lawyer in Miami, Florida, told Vocativ over the phone in February. “But the attorneys claimed it wasn’t beneficial, because of their investigation. So that was the reason why I was part of that class action.”

The suit was dismissed later that November, following a confidential settlement made between the parties, according to Goldfarb. When reached via e-mail in February, Goldfarb’s attorneys declined to comment on the case. Accera’s media representatives have not responded to e-mails sent to them by Vocativ in February regarding the lawsuit or the FDA’s letter, nor have they responded to requests for an interview.

According to an interview Accera CEO Dr. Charles Stacey held with Reuters recently, though, the company has since squared things away with the FDA. The company appears to no longer actively market Axona, having laid off its salesforce in mid-2014, according to another interview Stacey held with BizWest in 2016. But the company’s website also continues to describe it as a “medical food intended for the clinical dietary management of the metabolic processes associated with mild to moderate Alzheimer’s disease.” (The FDA’s Charlotte Christin, whose letterhead appears on the FDA’s 2013 warning, has also not responded to Vocativ’s inquiry about Axona’s status.)

Following the controversy over Axona, Accera redoubled its focus on developing AC-1204. The drug had seemingly always been intended as an improved follow-up to Axona, both being a powdered form of caprylic acid that patients could mix with water, but now the company poured its resources to shepherding it through the clinical trial process. At the very least, they hoped that AC-1204 would be effective for people not genetically predisposed to Alzheimer’s, as Axona once appeared to be. But it seems AC-1204 fell flat even there.

Of course, failures such as these have long been the rule, not exception, of Alzheimer’s research, said Hendrix.

“Whether it’s a drug candidate, a medical food, a nutraceutical, whatever, we have seen on many occasions where an early-stage trial, on a small population, looks really exciting and has great results, but then when you do the Phase III trial, it fails,” he told Vocativ. (Phase III trials are typically the most meticulous tests of whether drug is effective and safe in humans, prior to receiving FDA approval.)

The Alzheimer’s Association had in the past warned sufferers away from products like Axona that had been released to the public without hardy evidence backing up their promoted benefits. But Hendrix now offered measured praise for the company.

“What we support is strong science. And what we’ve seen is that the company has gone back and decided to conduct the kind of clinical trials you see with other drug candidates,” Hendrix said. “And for that, we applaud them.”

Whether there will be anything left to salvage from Accera’s efforts remains to be seen. Samuel Henderson, Accera’s vice president of research and development, remarked in a press release that the trial’s preliminary results, which will reportedly be made public later this summer, indicated a flaw with the drug’s design, not Accera’s fundamental theory that refueling brain cells could stave off the disease. The company, therefore, intends to proceed with more trials, using a reworked formula. And other companies are forging full steam ahead with their attempts. Swiss-based pharmaceutical Roche announced in late February it would soon start a second Phase III trial of its drug, crenezumab.

Disheartened as Alzheimer’s advocates are when a drug flounders at the finish line, Hendrix said that we have made real progress in understanding the disease in recent years. And any future breakthrough in drug treatments wouldn’t need to be a home run, just a stopgap that slows down mental decline in patients enough.

“The one thing about Alzheimer’s Disease that we do have going for us is that it generally affects older people. So if we could delay the onset by 5 to 10 years — if we got as far as 10 to 20 years — that would be the same thing as a cure,” he said, noting the inevitability of death. “But when we do die, we want our memories and our brains intact,” he added. “That’s what we’re fighting for.”