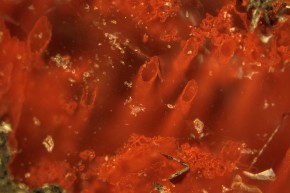 Earth’s Oldest Fossils Yet Discovered, Give Hope For Life On Mars
By Alasdair Wilkins

Earth’s Oldest Fossils Yet Discovered, Give Hope For Life On Mars

The 3.8 billion-year-old fossils existed at time when Mars also had liquid water on its surface

Haematite tubes from the NSB hydrothermal vent deposits that represent the oldest microfossils and evidence for life on Earth. The remains are at least 3,770 million years old. — Matthew Dodd
By Alasdair Wilkins
Mar 01, 2017 at 1:46 PM ET

Life on Earth may have begun even earlier than biologists suspected, at a time when the solar system was still in its infancy. Newly discovered fossils in Quebec suggest microbes were hanging out in hydrothermal vents at least 3.8 billion years ago. And if life could have popped up on Earth so early in its history, it’s possible it did on other young planets with water on their surface — which bodes well for the prospect of life on Mars, at least in its ancient past.

Reporting their findings in the journal Nature, an international team led by researchers at University College London explain that the fossils aren’t of the ancient bacteria themselves. Rather, what they have discovered encased in quartz are little tubes and filaments made of the iron ore hematite. Bacteria can create hematite as part of their own biological reactions, and the researchers said that this is by far the most straightforward, plausible explanation for these microscopic structures. While it’s conceivable the tubes and filaments could have gotten there through temperature or pressure changes, their analysis suggests these structures most closely resemble those formed by modern bacteria around hydrothermal vents today.

It would have been a simple existence for these microbes, spending their lives hanging out around vents on the seafloor. Not that there would have been much else to do on a still primordial Earth. These bacteria, dating somewhere between 4.3 and 3.8 billion years ago, would have lived during this period when Earth was essentially still under siege from space rocks (the planet only formed about 4.6 billion years ago.)

If this is indeed evidence of the earliest known life on Earth, then it suggests the simplest organisms could emerge on a planet almost immediately, in geological terms. The researchers suggest that’s one more reason to think that life could be very common throughout the universe, with it popping up quickly on any world where conditions are favorable.

Ancient Mars would fit the bill there, as it too had liquid surface water at this early juncture. While it’s hard to say these things for absolute certain, it’s thought that an ocean as well as lakes and rivers covered Mars during a period between 4.1 and 3.7 billion years ago, with more limited water sources hanging on for a while after that. If the development of life is as quick and easy as this new finding would suggest, there’s no reason to think Mars couldn’t have supported similar microbial life in its own ancient history. And if that’s not the case, then the researchers say that means Earth must be special or unusual in ways we still don’t fully understand. Either way, the possibilities are seriously intriguing.