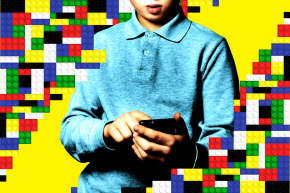 Forget Legos, Kids Are Getting Smartphones For Their Eighth Birthday
By Alejandro Alba

Forget Legos, Kids Are Getting Smartphones For Their Eighth Birthday

The age at which kids get their first devices keeps dropping

Back in the old days (whatever era that’s for you), eight-year-old kids would play outside with their bikes, build skyscrapers with Legos, create artworks with crayons, and sure, watch cartoons on TV. Now, more and more young kids are getting all their entertainment straight from their very own smartphone.

The 2016 Mobile Kids Report from Nielsen, released on Tuesday, looked at the age that kids get their first smartphone with a full service plan (voice, messaging, data). They found that 45% of kids get their smartphone at age 10, the most popular age to get a phone. However, 31% of kids got their devices at even younger ages, with 16% at age 8 and 15% at age 9.

Back in 2012, the average age at which kids got their first smartphone was 12 — and the youngest was 7 years old — according to research from Influence Central. Experts still believe the longer that parents wait the better, with appropriate ages tending to range around 11 to 13.

Nielsen was able to gather information for its latest report by surveying 4,646 parents with kids between the ages of 6 and 12 years old. About 90 percent of parents said the primary reason for giving their children a smartphone was the ability to reach out to them easily. However, some parents said they got their kids a phone so they could track them (80%) and also because their kids had been asking for one (66%).

Giving a child a smartphone at such a young age can put them at risk of seeing inappropriate content online or being tracked by retailers or even hackers, which is why parents who participated in Nielsen’s survey expressed concern over the welfare of the kids and their level of responsibility. Parents said they’re worried about their kids losing their phone — which are expensive — but they’re even more worried about the content they have access to online.

Children who do own smartphones are mostly using it to text, according to Nielsen. The next three activities in which they spend the most time on are downloading apps, playing preinstalled games, and browsing the web.