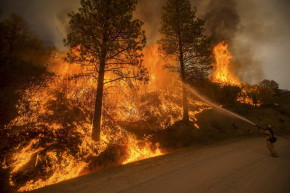 Wildfires Are Mostly Our Fault Now
By Ed Cara

Wildfires Are Mostly Our Fault Now

The vast majority of wildfires over the last 20 years have been sparked by people, not nature

As if you didn’t need another reason to self-loathe humanity, it turns out that not only are we the major cause of global warming, we’re also mostly responsible for turning our forests to a burnt crisp.

Researchers studied more than 1.5 million out-of-control wildfires recorded across the U.S. from 1992 to 2012. They found that 84 percent of these fires had been directly sparked by people, accounting for 44 percent of the total land burned. Human-caused wildfires, compared to those naturally caused by lightning, were also scattered everywhere and seen during the more humid months of the year. And these factors have greatly expanded the range of where and when wildfires naturally tend to strike, the researchers concluded.

Their findings were published Tuesday in Proceedings of the National Academy of Sciences.

“It’s generally pretty well known that people start a lot of fires; everything from campfires to burning yard waste to accidental fires in homes and other structures. But in the past, I used to think of ‘wildfire’ as a process that was primarily natural and driven by lightning,” said study author Bethany Bradley of the University of Massachusetts Amherst in a press statement. “This analysis made me realize that human ignitions have an extraordinary impact on national fire regimes.”

That impact, in addition to lost land and wildlife, includes the billions of dollars we’ve spent in recent years to fight off wildfires.

Natural wildfires need low humidity, heat, and a powerful ignition source like lightning to start, making summers in the mountainous west areas of the country their traditional breeding ground. But Bradley and her colleagues estimate that human intervention has tripled the length of the typical wildfire season, which now encompasses the spring and fall.

Plenty of research has shown that we’ve played an indirect role in causing more frequent and devastating wildfires, with climate change both leading to hotter temperatures and more extreme weather events. But the current study is the first, according to the researchers, to tally how much a direct influence we’re having.

It’s also likely that opportunities for human-caused fires will become more plentiful in the future as our newly built homes edge closer and closer to the surrounding wildland and the climate continues to warm, the researchers wrote.

In other words: Gulp.