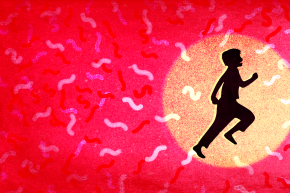 Antibiotic-resistant bacteria are a scary enough threat in adults, but like monsters under the bed, they’re oftentimes more threatening to kids. And according to a new study published this month in the Journal of the Pediatric Infectious Diseases Society, they’re only becoming more common.

Ohio researchers studied medical records collected from 48 children’s hospitals across the country, specifically looking for cases of infection caused by a family of bacteria typically found in our gut called Enterobacteriaceae. Among 94,000 children younger than 18 infected with the bacteria, they found that rates of multi-drug resistant Enterobacteriaceae infection had gradually increased from 2007 to 2015, and that these infections were associated with longer hospital stays. Worse still, and unlike in the past, the majority of cases were caught outside the hospital, suggesting these superbugs have become firmly rooted in the community.

“Antibiotic resistance increasingly threatens our ability to treat our children’s infections,” said study author Dr. Sharon B. Meropol, a pediatrician at University Hospitals Rainbow Babies and Children’s Hospital in Cleveland as well as a professor at the Case Western Reserve University School of Medicine, in a statement. “Efforts to control this trend are urgently needed from all of us, such as using antibiotics only when necessary, and eliminating agricultural use of antibiotics in healthy animals.”

Children are especially vulnerable to antibiotic-resistant infections, thanks to potentially weaker immune systems and less powerful drugs to treat them with compared to adults. And resistant Enterobacteriaceae are an especially dangerous kind of superbug, because many of these bacteria are quickly learning to repel just about every drug we have available against them.

The current study is only the latest to show that antibiotic-resistant infections are becoming more common among kids as well as adults. And though there have been some modest successes in catching the very worst of them before they become full-on outbreaks, their rise continues to be inevitable for now.