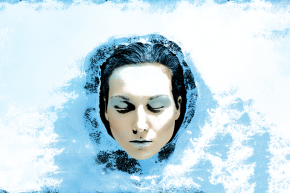 Scientists develop a new method of thawing cryogenically frozen tissue, which has long been a stumbling block

A surgeon’s dream is a macabre bank of organs, tissues, and digits, readily available body parts for when patients need a quick transplant.

But that doesn’t exist, at least in part because those tissues would have to be frozen and reanimated without ruining how they function. Today, scientists are pretty good at the freezing part. But the thawing is still an issue. The current gold standard, which involves putting the frozen tissue into a warm vat for a gradual thaw, doesn’t work for anything with a volume larger than three millileters. A kidney is on average about 205 milliliters. That’s not going to work.

Now researchers have taken a big step in the right direction—they have figured out how to warm up frozen organs using magnetic nanoparticles.

More New Nanotechnology Could Make Dentist Visits Thing Of The Past

Here’s how their system works. The tissue is frozen in a solution that contains iron oxide nanoparticles, which are coated in a silicone material to make them biocompatible. When it’s time to thaw, a copper coil is wrapped around the frozen sample. When it’s electrified, it creates an electromagnetic current that stimulates the nanoparticles, making them magnetic and heat-generating as their magnetic fields flip-flop in a complex action of physics. The process allows the tissue to heat up rapidly and uniformly, protecting it from damage.

In the study, published Wednesday in the journal Science Translational Medicine, the researchers tested their warming technique on frozen individual cells, then on different frozen pig arteries and heart valves measuring up to 80 milliliters in volume. Ninety percent of the tissues defrosted with this technique were intact, with fewer cracks and damaging ice crystals than the standard method. Sophisticated imaging techniques showed that the thawed tissues were more comparable to fresh ones than to those that had been defrosted the standard way.

This isn’t the first time complex tissues have been successfully defrosted—another team did this with a comparable technique, on a rabbit brain, in 2016. But the nanoparticles technique can be scaled up for larger, more complex tissues, like whole organs or limbs, the researchers said.

There’s a chance that a system like this could someday be used on an entire human. There are some 350 people who are currently cryogenically frozen in the U.S. and in Russia. A number of them are biding their time until scientists find the cure for what ailed them, like cancer; others are seeking a type of immortality. This method probably, however, wouldn’t help those in particular since the nanoparticles have to be frozen in the solution.

The researchers aren’t thinking on that kind of scale quite yet, however. They’re more concerned with expanding their experiments past rabbit organs to human samples, with finding the right ways to wash the nanoparticles out of thawed organs with lots of nooks and crannies (like hearts), as well as probably regulatory hurdles. They have already received a grant from the U.S. Army to continue their work on composite, donated human tissues that combine skin, muscles, and large blood vessels. They suspect it will take another seven to 10 years before their technique could be used reliably on large organs. But who knows, maybe someday it could even be used to defrost a whole human.