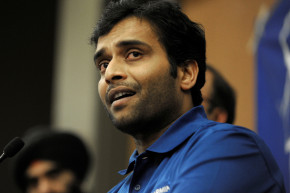 Donations for three men shot in an alleged hate crime have come from all 50 states and 39 countries.

Aloo Madasani attends a vigil at a conference center in Olathe — REUTERS
By Sara Morrison
Feb 28, 2017 at 11:38 AM ET

GoFundMe campaigns for three men who were shot in an alleged hate crime have raised more than $1 million in less than a week.

Srinivas Kuchibhotla and Alok Madasani were sitting in an Olathe, Kansas, bar last Wednesday when another patron, Adam Purinton, allegedly made comments about their ethnicity and immigrant status before shooting at them. Kuchibhotla was killed; Madasani survived. A third man, Ian Grillot, was also shot as he attempted to stop the shooter.

Purinton was charged with one count of murder and two counts of attempted murder, and the FBI is looking into whether or not he can also be charged with hate crimes. Madasani told the New York Times that Purinton asked them if they were in the country illegally; in the 911 call from the woman who turned Purinton in, she said he told her he “shot and killed two Iranian people in Olathe.” Contrary to Purinton’s alleged belief, Madasani and Kuchibholta are from India, not Iran, and were in the country legally for their jobs as engineers.

A peace march in support of the victims that was held in Olathe over the weekend drew hundreds of supporters, but many in India and Indians living in America wonder if the shooting was an isolated incident or a sign of things to come in an America where immigrants from certain countries seem increasingly unwelcome. Kuchibholta’s widow said last Friday at a press conference that she wanted to fulfill her husband’s wishes and stay in America but “I have a question in my mind: Do we belong?”

“I need an answer from the government,” she said. “What are they going to do to stop this hate crime?”

President Trump has repeatedly criticized Iran, and his administration has cracked down on immigration from certain Muslim-majority and Latin American countries — though any connection between those well-publicized sentiments and Purinton’s alleged actions are, at this point, unknown. Trump has yet to comment on the shooting, prompting the Kansas City Star to call any comment he made on it at this point to be “embarrassingly late” and the lack thereof “disquieting.”