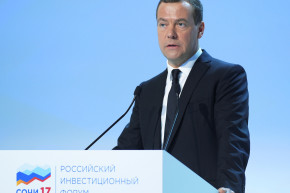 In Russia's sluggish economy, politicians are pretending the crisis is behind them

Russian Prime Minister Dmitry Medvedev at an investment forum in Sochi — REUTERS
By Shira Rubin and Tanya Bekker
Feb 28, 2017 at 9:38 AM ET

In a boisterous speech to a plenary meeting at the Sochi 2017 Russian Investment Forum on Monday, Russian Prime Minister Dimitry Medvedev lauded what he said was Russia’s strength in overcoming its economic crisis — a years-long phenomenon which is, in fact, still very much going on.

“Today we can surely say that we have learned how to cope with all these challenges, the decline of the gross domestic product has ceased,” the prime minister said. Looking towards the future, he proclaimed, “Russia has all the components to become one of the leading technology country of the world.”

But while Medvedev painted Russia as a resurgent country, on social media, regular Russians pleaded with the politician for a reality check. In Russia, wages, standards of living, and life spans are not getting better, they said. Even food is too expensive. After two years of recession, government statistics indicate that the average Russian eats less meat, fish, dairy products and sugar, while consumption of potatoes, melons and vegetables has jumped. More Russians grow a portion of their own fruits and vegetables to avoid the soaring food prices.

A movie poster reading, “Medvedev declares an end to the economic crisis and Russia’s victory over unemployment. He always says no! No crisis, no unemployment.”

“Breaking news from a parallel world. #Medvedev proclaims an end to the crisis and the victory over unemployment.”

“How do you escape a financial crisis? Say everything’s normal, and that there is no crisis. And the main thing, that there was no war. I kiss you. Medvedev. There is no money.”

Russia’s economy was hit hard by the drop in oil prices in 2014 as well as economic sanctions imposed on the country after the war in eastern Ukraine and the annexation of Crimea.

The sustained economic downfall stands in stark contrast to the future promised by President Vladimir Putin, who has for years put forth long-term goals to be fulfilled by 2020. Among them, goals for at least 60 percent of Russians to join the middle class, average salaries to rise to 40,000 rubles a month (less than $700 at current exchange rates), and life expectancy for both men and women to reach 75. Putin’s push for economic stability came with a parallel campaign that slashed press and political freedoms.

So far it is only the latter part of that promise that has come to fruition. Federal figures from January found that 4.3 million of Russia’s 143 million are unemployed, a 4.5 percent jump when compared to just a month before.

Putin is preparing for presidential elections in 2018, and continuing to repeat the same promises. And while opinion polls show that many Russians believe he is doing poorly on the economy, many blame Western sanctions and, therefore, approve of Putin’s tough foreign policy stance. Putin, who has been in power for a cumulative 17 years, is expected to win a fourth term. That would ensure him another six years in office.

“Russia’s gross domestic product has stopped falling” said a government leader. Sure! If something is at rock bottom, it can’t fall any lower.”