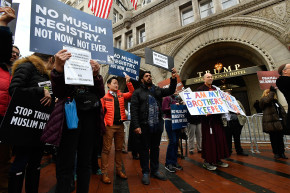 Will Data Brokers Sell Muslim Lists To The Trump Administration?
By Janus Kopfstein

Will Data Brokers Sell Muslim Lists To The Trump Administration?

A coalition of human rights and civil liberties groups are demanding that commercial data-harvesting companies refuse to sell their data to the Trump administration, warning that Trump could use the data to carry out repeatedly-stated plans for mass-deportations and the discriminatory targeting of Muslims.

The campaign comes from an investigative report by Amnesty International that found that the data the Trump administration seeks can be easily bought from many data broker companies, which offer neatly-categorized consumer profiles of individuals such as “Americans with Bosnian Muslim Surnames.”

In a letter published Monday, 17 groups including Amnesty International, the Electronic Frontier Foundation, Color of Change, and the National Immigration Law Center called for the thousands of data brokers companies to not to be complicit in Trump’s agenda. The groups are demanding that data brokers — which collect consumer profiles on millions of American citizens — guarantee that their data and services will not be “purchased or otherwise used in ways that could lead to violations of the human rights of Muslims or immigrants in the United States.”

“While we cannot predict the future actions of the Trump administration, given Trump’s  statements about building a registry in the past, we must conclude that the risks to human rights are enormous,” the groups write in the letter. “Data brokers and data analytics companies — like all businesses — have a responsibility to respect human rights, which means they must make sure they do not cause or contribute to human rights abuses.”

According to a report by Amnesty International released along with the letter, many data brokers are eager to sell profiling information neatly categorized by religious affiliation, ethnicity, and other factors. One site, ExactData.com, provides its data in lists like “Americans with Bosnian Muslim Surnames” and “Unassimilated Hispanic Americans.” The site lists 1,845,071 people in the United States as Muslim, and offers access to the complete list for $138,380 – just 7.5 cents per person.

The report comes after Vocativ and other outlets reported on the ease with which the Trump administration could construct a database of Muslims or immigrants using profiling data bought from companies like Palantir and Experian. While some data brokers like responded that they would not agree to sell any data if they believed it would be used for discriminatory targeting, the vast majority of companies in the expansive industry have remained silent. Data giants like Google and Facebook also faced pressure from employees after hesitating to pledge that they wouldn’t help the government compile lists of Muslims and immigrants.