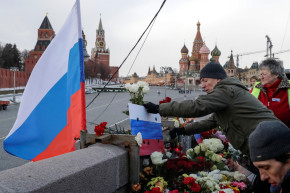 Putin’s Opponents Targeted Even In Death
By Marc Bennetts

Putin’s Opponents Targeted Even In Death

It is two years since Boris Nemtsov, the Kremlin critic, was gunned down in central Moscow just hours after calling on Russians to attend a protest against President Putin’s war in Ukraine. Yet in death, as in life, Nemtsov is still capable of uniting Russia’s fragmented and beleaguered opposition.

“Russia will be free!” “Russia without Putin!” chanted a crowd of around 15,000 people as they matched through central Moscow on Sunday, on the eve of the second anniversary of Nemtsov’s assassination. Watched over by riot police in body armour, the protesters carried portraits of the opposition leader and signs with a play on his first name that read, simply, “Fight!”

But it’s a fight that is getting harder and harder for those opposed to Putin, who has now ruled Russia for seventeen years. Victory at next year’s presidential election will take Putin to 2024, and almost a quarter of century in the Kremlin. That’s longer than any other Russian or Soviet leader, apart from Joseph Stalin.

Putin’s long rule has been secured, opposition activists say, by the elimination of potential rivals for power, with only quasi-opposition parties and candidates allowed to participate in parliamentary and presidential elections.

“If Putin really was a strong leader, like state media always tells us, he wouldn’t be afraid of genuine opposition,” Ilya Yashin, a prominent anti-Kremlin activist, told Vocativ. “Instead, he is trying to clear the field of anyone who can challenge him.”

Nemtsov was one of five opposition figures who led the biggest ever protests against Putin’s rule in 2011-2012, when tens of thousands of people took to the streets in an unprecedented show of dissent. Although five ethnic Chechens, including a member of the security services, have been charged with his murder, Nemtsov’s family fear that they will not find out who ordered his assassination while Putin is in power.

Of the other opposition leaders who stood alongside Nemtsov during the 2011-2012 protests, two of them – Garry Kasparov, the former world chess champion, and Yevgeniya Chirikova, a housewife turned Kremlin critic – have fled Russia over fears for their safety. Another, Sergei Udaltsov, a fiery leftist, is serving four-and-a-half years in jail after being found guilty of plotting mass riots. He denies the charges.

The Russian authorities are targeting Nemtsov even in death. In a startling illustration of the Kremlin’s intolerance of even low-level public dissent, an unofficial “people’s memorial” to Nemtsov on the bridge where he was murdered is coming under attack on an almost nightly basis.

“Street cleaners backed up by police come around 4am and seize all the flowers,” Grigory Saksonov, a 60-year-old opposition activist who stands guard at the memorial, told Vocativ ahead of the anniversary of Nemtsov’s shooting. “But people just bring fresh flowers the next morning.” Several people have been arrested while trying to defend the unofficial tribute.

The dangers faced by Russian opposition figures were highlighted this month by the collapse of Vladimir Kara-Murza, a pro-democracy activist. Kara-Murza was taken to hospital in a critical condition for the second time in two years after what doctors said was “acute poisoning by an undetermined substance.” He has since recovered and left Russia for an undisclosed location.

Kara-Murza was taken ill in similar circumstances in 2015 and spent months in hospital in Moscow and the United States. He said after his recovery that he believed he had been poisoned as revenge for his opposition to Putin. “The political opponents of Vladimir Putin have had a very unfortunate track record of imprisonment, illness, or worse,” he told me after his first collapse.

The last man standing among the leaders of the 2011-2012 protests is Alexei Navalny, a popular anti-corruption lawyer who plans to challenge Putin at next year’s election – if he can get on the ballot. A contradictory figure, with ties to both the pro-democracy movement and Russian nationalists, Navalny made a name for himself with a series of explosive investigations into high-level corruption. In 2013, in a shock to Russia’s carefully-managed political system, he took almost 30 per cent of the vote at mayoral elections in Moscow, despite being barred from national television. He also coined a popular nickname for Putin’s ruling United Russia party: “The party of crooks and thieves.” Navalny says he wants to become president so that Russians can “live normally like in a European country.”

The Kremlin is unlikely to let him run. This month, in what Navalny described as an attempt to “sabotage” his presidential bid, he was found guilty of fraud by a court in Kirov, a city in central Russia, and handed a five-year suspended sentence. Under Russian law, anyone with a criminal conviction is barred from seeking public office. Navalny, who denies the charges and says the court’s decision was ordered by the Kremlin, argues that the Constitution states that only people serving jail time are barred from elections.

“What we are seeing now is a sort of telegram sent from the Kremlin, saying that they believe that I, my team, and the people whose views I voice, are too dangerous to allow us to take part in the election campaign,” Navalny said in court. “We don’t recognise this ruling.”

The trial was a rerun of a four-year-old case which originally resulted in Navalny being jailed for five years in 2013. He was freed on appeal after tens of thousands of his supporters rallied outside parliament in one of the biggest unsanctioned protests in modern Russian history. That conviction was quashed last year by Russia’s Supreme Court after the European Court of Human Rights ruled Navalny had not been given a fair trial.

In a clear challenge to the authorities, a defiant Navalny this month opened election campaign offices in St Petersburg and Yekaterinburg, Russia’s fourth biggest city. “The authorities are afraid of me and of any candidate who speaks the truth,” said Navalny in St Petersburg. Over 1,500 locals have already volunteered their services for his presidential campaign. A decision on his bid to get on the ballot is due in December. In the meantime, he and his supporters plan to ramp up the pressure on the Kremlin by opening another 75 election campaign offices across the country, from Moscow to Vladivostok.

Despite his bid to run in 2018, Navalny has previously said that street protests are likely to be the only way to remove Putin from power. But the fighting that has devastated neighbouring Ukraine ever since demonstrators drove the country’s pro-Russian president, Viktor Yanukovych, from power in 2014 has made many Russians wary of the consequences of protest. Opinion polls regularly indicate that while many Russians are unhappy with the state of the country’s economy, healthcare, and so on, the fear of sharing Ukraine’s unhappy fate makes them reluctant to take to the streets.

It’s not all bad news for Russia’s opposition. On Sunday, as Muscovites were preparing to pay tribute to Nemtsov, Ildar Dadin, a well-known anti-Putin activist, was released from a Siberian labor camp after his conviction was overturned by Russia’s Supreme Court on a legal technicality. Dadin says he was tortured while behind bars, an accusation denied by prison officials. His case made international news and he was named a prisoner of conscience by Amnesty International. “I think he was released because of all the noise about his case in the world,” Anastasia Zotova, his wife, told Vocativ. Despite his ordeal, Dadin pledged to continue his fight against Putin.

He’s not the only one who intends to keep on pushing for the ex-KGB officer’s ouster.

“If I didn’t think we had a chance, I wouldn’t be doing what I do,” said Yashin, the opposition activist, ahead of Sunday’s march in memory of Nemtsov. “Putin has been in power so long that he’s starting to remind people of old Soviet leaders like [Leonid] Brezhnev. People will soon start openly mocking him, just like they mocked Brezhnev. When that starts to happen, we’ll see real change.”