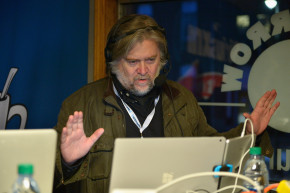 Brands Are Abandoning Breitbart, But Don’t Expect The Site To Fold
By Jeff Andrews

Brands Are Abandoning Breitbart, But Don’t Expect The Site To Fold

Breitbart News has long contended that its incendiary content reflects the views of mainstream America, and unfortunately Donald Trump’s election went a long way toward bringing the site—whose writers have denounced progress made on workplace equality and gay rights—to the forefront of American political discourse. A social media campaign called Sleeping Giants, however, is trying to force Breitbart back to the fringes by hitting the site where it hurts—its wallet.

Since November 17, Sleeping Giants has been asking people to tweet at brands when their advertisements appear on Breitbart and asking them to remove them. Over the weekend, the campaign, which is run by a man who asked to remain anonymous, announced that 100 more advertisers have obliged, bringing the staggering grand total to more than 1,300.

“They’re literally paying for this inflammatory content to get put up and published, and we just don’t think that’s right,” said a representative from Sleeping Giants, who said the group will stay anonymous for the immediate future. “They’re allowed under free speech to say what they want, but we don’t think they should profit from it for sure. It’s not a Trump thing. It’s a hate thing.”

Sleeping Giants owes its success to two factors. First, it’s not hard to see why Breitbart’s content, which critics have written off as racist and misogynistic, is off-brand for advertisers. This is a site that peddles the notion that women are inferior to men, Muslims are terrorism starter-kits, and Mexicans are, as the president said at the start of his campaign, rapists and murders. The site’s attempts to deny that it is a platform for hate speech falls flat when its former chairman Steve Bannon tells journalists that Breitbart is the “platform for the alt-right,” the conservative political movement that has been panned for its racist agenda. Vocativ reported last week that there was an increase anti-Semitic comments on the site under Bannon’s watch.

Second, many brands weren’t even aware that they were advertising on Breitbart because the digital advertising ecosystem is so the convoluted and fragmented. Brands don’t buy display ads directly from a site. They buy inventory on the basis of demographics and price from a third party, which then matches the brand with the right site. When brands find out their ads are on Breitbart, it doesn’t exactly take a lot of coercing to get them to yank them. It famously went to war with the Kellogg’s cereal in December after the food company pulled its ads from Breitbart.com. The Sleeping Giants campaign has become so pervasive that its Twitter handle is used thousands of times a day.

The companies that Sleeping Giants has confirmed pulled ads from Breitbart range from local car dealerships to major apparel brands to professional sports franchises, and everything in between. Multiple ad-tech companies have blacklisted Breitbart, which arguably raises the profile of the ad boycott. The campaign has been such a success that sympathizers have set up Sleeping Giants accounts in other nations hoping to combat the spread of hate speech that has seemingly taken over the internet.

The pushback against Breitbart comes in tandem with a groundswell of opposition to the Trump presidency that’s led to a seemingly perpetual state of protest, the cancellation of countless town hall meetings, and even forced members of the GOP Congress to get cold feet about following through with what’s been their cause célèbre for the last 6 years—repealing the Affordable Care Act. Coupled with Trump’s dismal poll numbers, the growing opposition to Trump bears all the hallmarks of the right-wing protests in 2009 that gave birth to the Tea Party.

Given Breitbart’s fawning coverage of Trump in 2016 and the subsequent appointments of multiple Breitbart writers and editors to the Trump White House, perhaps no media outlet has come to embody Trump more, and the growing outrage to Trump is already affecting Breitbart.

After what was a sterling start to 2017, senior editor Milo Yiannopoulos lost his keynote speakership at CPAC, a lucrative book deal, and his job at Breitbart within the course of a few days after comments resurfaced where he appeared to advocate for pedophilia, suggesting that when Breitbart staffers reach the mainstream where they think they belong, the mainstream is rejecting them wholeheartedly.

But if Breitbart’s reach has a hard ceiling, it also has a hard floor. Breitbart is owned and funded by hedge fund billionaire, algorithmic trading pioneer, and Trump mega-donor Robert Mercer, which CEO Larry Solov confirmed over the weekend. Like a lot of partisan news sites owned by hedge fund billionaires, Breitbart’s goal is to generate influence in the political process, not turn a profit. Getting a little ad revenue out of it is just gravy to engaging and outraging the the right-wing fringe that put Trump into the White House.

Breitbart could not be reached for comment for this story.