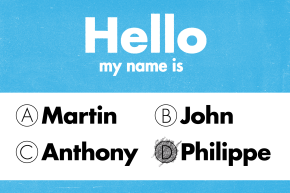 Your Name Really Might Shape How You Look
By Alasdair Wilkins

The first thing most of us get after we’re born is our name. And according to a new study from researchers at Hebrew University of Jerusalem, from that moment on, those names start to shape how we look, to the point that other people are shockingly good at guessing a person’s name based just on their appearance. Someone named, say, Emily is going to look different from someone named Jennifer — even if it’s the exact same person.

The researchers asked study participants to match photos of people’s faces with one of four or five names provided, and the participants consistently did significantly better than if they were just guessing completely at random. This was true even after the researchers accounted for obvious factors that relate appearance to names, like ethnicity or socioeconomic status. And it wasn’t just people who proved good guessers: A computer program developed an algorithm to judge what people with different names tended to look like, and it too proved surprisingly accurate in guessing names based new photos.

A person’s appearance wasn’t all that was needed to guess the name. Subjects were still only right at most about 40 percent of the time. What the several experiments comprising this study do offer is concrete evidence for the idea that someone can “look like” an Emily.

There’s good reason to think the connection may be governed by cultural stereotypes, as Israeli subjects proved good at guessing at Israeli names and French subjects did likewise with French names, but both groups struggled when dealing with the other nationality. A Frenchman named Philippe likely couldn’t consciously tell you what a Philippe is supposed to look like. But culture can be more insidious than that, with Philippe unknowingly absorbing these physical expectations and tailoring himself to them. It probably wouldn’t trigger a massive physical transformation, but those changes might be enough to make other people more likely to guess his name correctly on a multiple choice test.

Our names aren’t everything, but this research suggests they become something far more than just a random label our parents stuck on us as newborns. A name is the very first thing anchoring a person in society, carrying with it all the unmentioned, subconscious expectations of how a person with that name should look. In the endless tussle between genetics and environment, this study appears to be a fascinating point in favor of the latter, as our social environment begins shaping how we look from the moment it first knows what to call us.