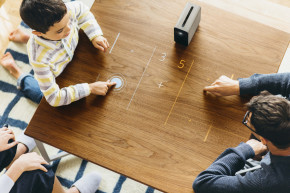 Sony Is Turning Any Flat Surface Into A Touch Screen

Soon, you won’t need to use your phone at home, because your home’s walls, kitchen tables, and even backyard could have their own touchscreens.

Sony announced Monday at the Mobile World Congress in Barcelona that it’s releasing a projector that turns any flat surface into a 23-inch HD touchscreen (80-inch maximum). Sony first announced its Xperia Touch projector prototype last year, but it was reported to be buggy and difficult to use. Since, Sony says it has improved the product and promises that its interface is “fast, fluid and responsive to physical touch.”

The Xperia Touch will work just like an Android tablet and allow users to manage calendar events, check the weather, and doodle on a memo board. Users will also be able to access Skype and leave video memos for family members with its 13-megapixel camera. It also doubles as a smart speaker using Google Assistant. Other features allow users to browse the web, watch videos, and download apps and games from the Google Play Store.

The projector seems great for entertaining kids or checking a recipe in the kitchen, since it’s quite portable and small. It could also be used to project movies, but the bigger the projection, the worse the image quality gets.

Although the idea of turning any flat surface into a touchscreen seems sci-fi, the technology inside the projector is not that complex. The Xperia Touch uses a combination of infrared sensors and a 60 frame-per-second camera (same video capability the iPhone 6 has) to detect gestures and finger taps.

Sony’s concept of giving random surfaces touch ability is not completely new, but the company is one of the first to manufacture and commercialize it. There have been small companies who’ve released touch projection keyboards and other projectors with similar features, but those usually required a special board with a smart stylus. The Xperia Touch will go on sale this spring in Europe for €1,499 (about $1,583) and later released in the U.S.