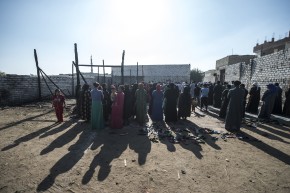 Egyptian Christians last summer in the rubble of a torched church. — AFP/Getty Images
By Gilad Shiloach
Feb 26, 2017 at 10:44 AM ET

A pro-ISIS group in Egypt is calling upon the country’s Muslim majority to manufacture home-made weapons and increase attacks against the country’s embattled Christian minority.

“Our goal is to spread the horror among apostates and infidels,” wrote the group that identifies as “The Wolves of Egypt” on the Telegram messaging app Friday evening. They circulated guides for “making a bomb in your mother’s kitchen,” including instructions for assembling pipe bombs and gas cylinders, which it said were to be used against “Egyptian apostates” and foreigners living in Egypt.

The group summoned “those incapable of migrating to join the fight” to send in intel regarding “soldiers, spies, security members, policemen, officers, and bank managers working with Egyptian Christians, Crusaders living among you, non-Egyptian Christians and any other filthy apostates.”

Last week, ISIS militants in Egypt released a 20-minute video calling for the killing of Coptic Christians, calling the community “our first target and favorite prey.” The video promised to “liberate Cairo” and featured the first appearance of Abdullah al-Masri, whom ISIS said had been responsible for the bombing of a Coptic Christian cathedral in Cairo that killed 25 people in December. A few days later, a pro-ISIS group on Telegram released a hit list of Egyptian churches in each of the country’s provinces.

Egypt’s Christian Copts are the Middle East’s largest Christian community, comprising about 10 percent of Egypt’s 90 million people. They have long complained of persecution by Islamist groups and have been fleeing Egypt since former President Hosni Mubarak was ousted from power as part of the protest movement that swept several Arab countries in 2011.