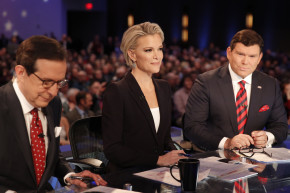 Fox News' Bret Baier tweeted that gaggles “should be open to all credentialed orgs," and his response inspired thousands of replies

White House Press Secretary Sean Spicer on Friday sparked an uproar in the media world after barring several news outlets from attending a private briefing. Though several well-known journalists condemned Spicer’s actions, one Fox News anchor’s viral response stood out for comparing Friday’s incident to past moves made by the Obama White House.

In an unprecedented move, Spicer blocked multiple news organizations from the gaggle and handpicked which outlets were allowed to attend. CNN, the New York Times, BuzzFeed, BBC, and the Los Angeles Times were among those not permitted to enter the closed-door meeting. The Associated Press and Time chose not to participate out of solidarity, while other outlets whose reporters did sit in, such as the Wall Street Journal and McClatchy, later condemned it.

But while Fox News was included in the meeting, Bret Baier, the network’s chief political anchor, took to Twitter on Friday to offer his take on the situation, saying that such gaggles “should be open to all credentialed orgs.” He also commended CNN and the New York Times for standing with Fox when the Obama administration tried to exclude Fox in 2009.

Some at CNN & NYT stood w/FOX News when the Obama admin attacked us & tried 2 exclude us-a WH gaggle should be open to all credentialed orgs https://t.co/8Vjcs0KCPR

Baier’s tweet, which was retweeted 14,000 times and favorited 33,000 times, was referring to when Fox’s rivals came to their defense when the Obama administration attempted to shut out the network eight years ago.

Though many of the 3,000-plus responses to the tweet praised Baier for standing up for his peers or came to the White House’s defense, many questioned if the comparison was apt given President Donald Trump’s constant attacks on the media (Spicer’s move came shortly after Trump put the “fake” news media on blast during his speech at CPAC).

@BretBaier Obama never called the press or Fox News "the enemy of America". The hostility from the new administration is unprecedented

@BretBaier That you even have to make the point, Brett, illustrates what forces are at work against the fundaments of the Constitution.

@BretBaier To be fair, all Obama did was point out all the shit and lies you pass off as news, but yes, you're right.

@BretBaier You mean like when Obama "attacked" Fox News by sitting for an hour-long interview with O'Reilly (who interrupted him 54 times)?