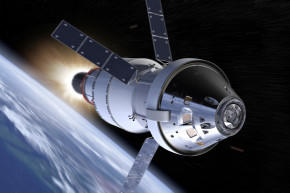 NASA officials confirmed Friday that they are exploring the feasibility of putting astronauts on the first flight of the Orion spacecraft, the agency’s successor to the space shuttle program. If NASA does make the move, it won’t come without risk, as Orion and its rocket system will need serious upgrades to make them capable of safely carrying astronauts — and the agency may only have a year or two to make all the necessary changes.

This request appears to have come from the Trump administration, though NASA officials in a Friday press call left unclear the White House’s motivations and whether it is seriously prepared to provide the funding necessary to make Orion’s first flight a crewed mission.

NASA Watch, a longstanding agency watchdog news site, reported the details of what it described as “a hastily-arranged 30 minute media briefing” to discuss this potential change of plans. Agency officials Bill Gerstenmaier and Bill Hill stressed this was purely an exploratory study, and they had no opinion yet on whether this was a good or plausible idea — the basic tenor of the call appears to have been that NASA is just asking questions, and concrete answers about the mission’s future won’t be possible until the study is completed later in the spring.

That the call was barely announced and held on a Friday afternoon suggests NASA may not have wanted the announcement to get much attention, particularly when just two days before the agency captured the public imagination with a major exoplanet discovery.

The Orion spacecraft and its accompanying rocket, the Space Launch System, are designed to let NASA pursue human space exploration beyond low-Earth orbit for the first time since the Apollo program. The current plan calls for the first uncrewed mission in September 2018, with a three-week circuit around the moon. The next flight would carry astronauts for a similar lunar flyby sometime between 2021 and 2023, potentially marking the first such journey since Apollo 17 in 1972. While an uncrewed dress rehearsal isn’t always necessary — the first orbital space shuttle flight, for instance, carried two astronauts — such a major pivot in plans so soon before the planned launch date would leave NASA with precious little time to ensure the crew’s safety.

The potential plan under discussion would send two astronauts on an eight- or nine-day mission. The addition of life support, emergency abort systems, and other significant upgrades to the SLS rocket needed to make the mission capable of carrying humans would likely be both extensive and costly. The officials said the White House had at least indicated a willingness to push back the launch date if the results of the feasibility study were positive.

While this news initially appears to track with the Trump administration’s previously reported preference to scrap NASA’s scientific research in favor of a greater emphasis on space exploration — and human space exploration in particular — an earlier analysis by NASA Watch founder and former agency scientist Keith Cowing calls that into question. In his view, the priority of Trump’s top space advisers like former congressmen Newt Gingrich and Robert Walker is actually on commercial space exploration.

Orion and SLS are a top priority not for them, but for a group centered at the Marshall Space Flight Center in Alabama, where the spacecraft are being built, who favor the more traditional, government-backed approach that Orion represents. As Cowing suggests, bumping up the timeline for the first crewed mission could be an effort by the Marshall contingent to make Orion more appealing to the new administration, increasing the odds of its survival.

NASA’s acting administrator Robert Lightfoot, who announced the feasibility study, is himself a former director of Marshall. Trump has yet to nominate a permanent NASA administrator. Until then, the future of space exploration under Trump remains uncertain. At least with Orion, more clarity should come with the release of the study later this spring.