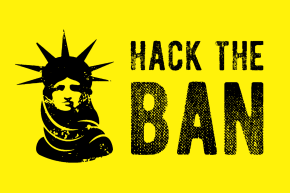 After President Trump announced his ban on travelers from seven Muslim-majority countries, protesters and lawyers rushed to major airports to help those detained. Soon there may be an app for that.

For 12-hours on a Saturday, more than 60 developers, programmers, designers, and other tech-savvy creatives gathered in Brooklyn to “hack the ban,” under the advisement of immigration experts.

“Hack the Ban” was the latest of a growing number of hacking events focused on the larger mission of resisting policies and sentiments made by the Trump administration. Among these were Debug Politics, a weekend-long event attended by several hundred people, and an event held at the University of Pennsylvania with the intention of saving climate data from the EPA website.

Among the in-progress projects that came out of the Brooklyn event: an app to help travelers ensure legal representation if detained at an airport; an app aimed at verifying and notifying users of ICE raids in real time; and even one aimed at supporting restaurants serving cuisines of countries listed in the travel ban.

“This event is happening in a context…in the midst of events that are unfolding hour by hour, day by day, week by week” said Justin Hendrix, executive director of the NYC Media Lab and an organizer of the event said during the day’s opening remarks. “There’s a lot to say about those things and a lot to mourn about those things. But we’re not going to spend today doing that.”

Hack The Ban was first imagined back in January, before the a Washington state lawsuit temporarily blocked Trump’s travel ban executive order and before the administration introduced new guidelines indicating a crackdown on undocumented immigrants.

One team worked to develop Redadalertas (RaidAlerts), an open source app first conceived during the Obama administration by an American brought to the U.S. by undocumented parents. The app, still in its preliminary stages, aims to help alert people of Immigration Customs And Enforcement (ICE) presence at traffic checkpoints and workplaces.

Hack The Ban participants worked to help RaidAlerts develop a verification process for raid reports that spread quickly across social media. Without verification, experts warn that alarming notifications could result in unnecessary panic. (Already, nervous members of immigrant communities have been keeping their children home from school, missing work, and locking down their homes in reaction to the social media-aided rumor mill.)

One project that got its start at Hack the Ban was “Border Buddy,” a collaborative effort between grassroots Muslim American organization MPower Change and several programmers, developers, and designers. “Border Buddy” aims to help travelers concerned about getting held up by Customs and Border Protection (CBP) to “check in” prior to their flight, stating their estimated arrival time. In doing so, they would receive guidance on how to handle a screening situation. If the user then failed to check in upon arriving and exiting the airport safely, an alert would be sent to CLEAR, an organization that offers legal help to Muslim, Arab, and South Asian communities affected by national security and counterterrorism policies.

MPower campaign manager Mohammad Khan said the idea came from the experiences of staff members and people within their own networks.

“One of the things we’ve heard over and over again are stories of people getting caught in this blackbox of CBP where they didn’t know their rights…and ended up getting deported even though they were greencard holders or had visas,” he said. Khan says that he has been held in CBP secondary screening rooms himself following international travel for hours at a time.

“I have the privilege of being educated on my rights…but for folks who don’t have that training and education to begin with, it can be very terrifying.” Khan and his new team of volunteers plan to have a prototype available within a few weeks.

Some projects were took a less direct approach. Andy Doro, an artist and designer, wants to help people “eat the ban.” He told Vocativ that he saw food as “an easy way in” to getting people to show solidarity and promote understanding of the banned countries’ cultures and set about creating an app.

By the end of the day, working with developer Kayla Galway and user experience designer Matthew Bambach, the group had a fully operational site up and running highlighting restaurants they found online and with the aid of help of a food tour project with the same goal. Next, they plan on releasing an app within the coming weeks after contacting the restaurants they intend to highlight. Already, fans of this idea are inquiring about the possibility of sister apps for other cities, something the three agree would require more volunteers.

Overall, said another event organizer Sriya Sarkar, the event achieved its goal: bringing tech-savvy developers together with more traditional organizers. “The fact that these organizations are able realize the potential of tapping into this community that is now here to work with them is a really great outcome of this event,” she said.