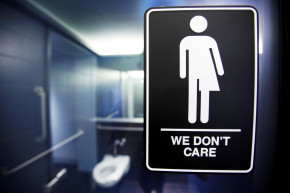 These Lawyers Plan To Protect Trans Students From Trump

President Donald Trump on Wednesday rescinded protections granted to transgender students that permitted them access to restrooms and other facilities that matched their gender identity. Now, national legal organizations are vowing to fight back to protect the rights of transgender youth.

The joint letter from the U.S. departments of Justice and Education stated that, contrary to the position of the Obama administration, nondiscrimination laws — particularly Title IX — do not require schools to allow transgender students to use their preferred bathrooms.

In response, legal aid organizations say they are ready to go to bat for students who encounter issues due to the government’s stance, which Lambda Legal says gives “sickening echoes” of the era of racially segregated schools.

“The roll back of the guidance doesn’t change the law, or the legal obligation of the school systems to treat transgender students with dignity and respect and give them access to restrooms so they can go about being students at school,” Susan Sommer, Lambda Legal’s director of constitutional litigation, told Vocativ in a phone interview. “We want that to be heard loud and clear: Title IX protects these young people. School districts that change course and do not heed this obligation will be sued.”

Sommer added: “I consider this to be a cruel and mean-spirited affront to children, but it should not have legal significance because Title IX stands whether or not this guidance remains the policy of the administration.”

She noted that Lambda has already filed lawsuits on behalf of transgender students and adults. In October 2016, the organization filed a lawsuit on behalf of Juliet Evancho and two others against the Pine-Richland School District over its discriminatory bathroom policies. It also filed a lawsuit against the former North Carolina Governor over that state’s anti-LGBT law, HB-2. Further, Sommer said Lambda also has some administrative complaints that have been filed and processed.

But Sommer said that arguably the most prominent case on the issue concerns Gavin Grimm, whose case is set to be heard by the Supreme Court in the coming weeks. Grimm, a transgender 17-year-old, sued his Virginia public school over using the bathroom that corresponds with his gender identity. Grimm previously won in a lower court.

“Whether the guidance is there or not, the meaning of the statute is going to transcend it and be something for the court decide,” Sommer said. “It might well [make Trump’s action moot].”

Other organizations are also offering legal assistance to members of the transgender community. “No matter what this administration says, the law remains on transgender students’ side, and students can still take legal action when schools cross the line and discriminate against them because they are transgender,” Transgender Law Center executive director Kris Hayashi said in a statement.

The Center was set to hold, along with the Gay-Straight Alliance Network, a “virtual town hall” on Thursday to talk about what Trump’s move means and the future of trans youth advocacy.

“We know that people have a lot of questions about what happened yesterday and what this means and what they can do, so we’re going to try to provide some answers,” Ilona Turner, legal director at TLC, told Vocativ on Thursday. Turner’s message for students is that “if their schools do take action to discriminate against transgender students as a result of this guidance being rescinded, we urge them to let us know and we will help them defend their rights.”

In July 2016, TLC filed suit against Kenosha Unified School District in Wisconsin on behalf of transgender boy Ash Whitaker. The district court granted Ash a preliminary injunction against his school, finding that he was being harmed seriously everyday due the school’s policy, which denied him access to male-designated restrooms. Turner said that she expects TLC to pick up more cases like Whitaker’s due to Trump’s withdrawal of the Obama guidelines.

“I think unfortunately we are going to see an uptick in discrimination as a result of this. Schools in some areas are going to feel emboldened to roll back policies that protect transgender students,” Turner said. “We’ve already seen as a result of this election that incidents of hate, violence, and attacks are up dramatically across the country against a number of marginalized communities, and this is likely to be no different.”