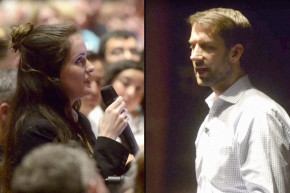 Donations Pour In For Woman Who Yelled At Her Senator

Kati McFarland, a young woman from Arkansas, stood up to ask her senator, Tom Cotton, a very personal question.

“We are historically a Republican family, we are farming family, we are NRA family,” she began. “Unfortunately, [I] inherited an incurable genetic disorder… Without the coverage of that preexisting condition, I will die. That is not hyperbole. I will die.”

Her question to Senator Cotton, a Republican, was about the Affordable Care Act, or Obamacare, which the GOP has long fought to repeal. “Will you commit today to replacement protections for those Arkansans like me?”

Senator Cotton tried his hardest to avoid a direct answer, but McFarland wasn’t shy. She doggedly and persistently followed up, and ended up becoming something of a star. Her aggressive questioning was covered by national news outlets across the country Wednesday night.

The Republican Party is still working on its plan to repeal Obamacare and keep people like McFarland on affordable health care, but the evening did have an upside, at least for McFarland individually. Four months ago, she began a crowdfunding campaign asking for financial for medical devices, such as a new wheelchair, and money for medical expanses. Until last night, the campaign hadn’t been very successful.

After the event, the local “Ozark indivisible” Facebook page posted a call to help McFarland. “She asked the first question on the ACA and did an absolutely AMAZING job at holding her own. If you have anything to spare at all, please help her.” Less than 24 hours late, her campaign had raised over $8,000.

On her campaign page, donations are accompanied by compliments on her performance. “Kati, your valor last night at the town hall was extraordinary and says so much about your true strength,” said one of more than 200 contributors. “You are such an inspiration! Thank you for sharing your story tonight. Wishing you peace, comfort and healing.”

The outpouring of donations, others noted, is inspiring — but it does little to address the wider problem. Without comprehensive and affordable health care, others like her will struggle, and crowdfunding can’t help them all.