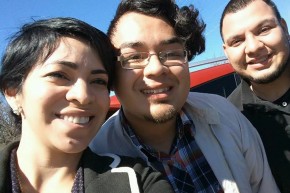 ICE Tried To Detain ‘Dreamer’ Who Had Unpaid Parking Tickets

"Nobody is insulated from Trump's deportation force," one immigration attorney says

Federal authorities attempted to place an immigration hold on a 25-year-old “Dreamer” after he was jailed in Texas over a pair of unpaid traffic tickets, the young man’s lawyer and police said.

Edwin Romero spent nearly 15 hours behind bars in Richardson, a Dallas suburb, before he was finally released on Wednesday afternoon. During that time, Immigration and Customs Enforcement pushed to keep the undocumented college student in custody — a request that Richardson police said it ultimately declined.

Romero’s near brush with ICE over a non-criminal infraction raises new concerns for so-called Dreamers, the thousands of young men and women brought illegally to the U.S. as children but who have now obtained temporary legal status here. It also shows that the Trump administration’s sweeping immigration crackdown could round up and deport the very people who thought they might remain protected, immigration rights experts told Vocativ.

“The takeaway should be that nobody is insulated from Trump’s deportation force,” David Leopold, a Cleveland-based immigration attorney and past president of the American Immigration Lawyers Association, told Vocativ. “I don’t think Dreamers should panic, but they should be realistic about this fact.”

Romero, who arrived in the U.S. from Mexico when he was six, is a recipient of the Deferred Action for Childhood Arrivals program, or DACA. Initiated under the Obama administration, it provides two-year work permits and a reprieve from potential deportations for certain people who, as minors, entered the U.S. illegally with their parents.

The fate of DACA and its more than 741,000 recipients has remained uncertain since Donald Trump entered the White House in January. On Tuesday, his administration indicated in a pair of memos that DACA would stay intact even as the federal government moved to vastly expand immigration enforcement.

But the case of Romero, an accounting student at the University of Texas at Dallas, shows just how vulnerable Dreamers remain.

Romero said he was driving to a friend’s house to study for an exam on Tuesday night when an officer stopped him for having an expired vehicle registration. The officer learned that the young man had warrants for a pair of unpaid traffic tickets and arrested him, according to police.

At the jail, police said they contacted ICE after Romero informed them that he was not a U.S. citizen. ICE initially told Richardson police that it would not seek an immigration hold for Romero, which could land him in federal detention, said Sergeant Kevin Perlich. But ICE later backtracked and asked police to keep Romero in custody related to a “civil matter,” Perlich said.

It is not clear what the civil matter referred to specifically, and ICE did not respond to Vocativ’s requests for comment.

Romero’s lawyer told Vocativ that other than the two unpaid tickets, her client has nothing on his record that would prompt an ICE detainer request. “We have no idea what they could potentially be talking about,” said Michelle Garza Pareja, an attorney with the Refugee and Immigrant Center for Education and Legal Services (RAICES), a nonprofit group.

More ‘No Relief’: Safe For Now, Dreamers Panic About Their Futures

Panic, however, began to set in among members of the immigrant-rights community, who had been notified of Romero’s arrest by a friend whom he had called from jail. Activists with the North Texas Dream Team urged people to flood the Richardson Police Department with phone calls and began to organize a protest. Garza Pareja rushed down to the police station to oversee the situation.

Police eventually released Romero at around 1:30 p.m. on Wednesday, almost 15 hours after he was first arrested. Richardson police cited that they would not keep him detained on a civil request from ICE, but did not elaborate further.

“He has no outstanding immigration deportation order, nothing that would cause any concern,” Garza Pareja said during a press conference afterward. “He should have been released immediately. He was robbed of his liberty.”

A different jail, however, may have very well honored ICE’s detainer request and turned him over to federal officials, Leopold said. “He could be in custody right now and ICE could have launched a notice to revoke his DACA and served him with a deportation charge,” he said. “Law enforcement in any country should not be luck of the draw. It should be based on discretion and smart enforcement.”