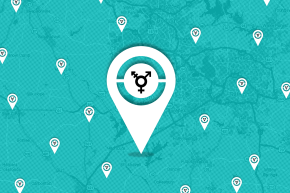 Tech-savvy activists aren’t going to take the Trump administration’s move to reverse progress made by transgender activists and advocates lying down.

A crowdsourced map, called the Safe Bathroom Club, shows restrooms where business owners support the rights of transgender and gender non-conforming people to use the restrooms safely. It was first created in May for North Carolina, but it has since expanded to include 200 businesses around the country (businesses can add themselves here).

Web designer Emily Waggoner, who is the partner of a trans man, created the map earlier this year in response to North Carolina’s controversial law blocking cities from adding LGBT protections to existing state discrimination laws. This effectively removed steps made by several municipalities to allow transgender people to use public and private restrooms of their choice.

Other similar projects like Refuge Restrooms also include restrooms across the country, and allow members of the public to add restrooms by street address and denote whether or not a restroom is accessible, unisex/gender neutral, a gendered single stall, or safe place. This way, transgender users can download the app to locate these restrooms and rate them.

The “bathroom debate,” as it has come to be known, has been waging for years now. Most recently, on Wednesday, the Trump administration rescinded Obama-era guidelines, first introduced in March, allowing students to use school bathrooms that coincide with their gender identities.

Despite the fact that there are no reputable recorded instances of transgender women assaulting or harassing non-trans women and/or children in the restrooms, the myth that this is a danger persists. It has been fueled by far right and transphobic pundits who continue to conflate transgender women with predatory men identified as men but dressed as women to engage in such acts. However, the truth of the matter is that transgender individuals are far more likely to be victimized for using public restrooms than non-trans people.

A landmark study that surveyed over 27,000 transgender Americans found that the majority of respondents actively avoid using public restrooms and nearly one quarter of them have had their presence in a restroom challenged within the past year. Twelve percent reported having been harassed, attacked, or sexually assaulted in a restroom over the course of the past year.

For young transgender students, the need for bathroom access extends issues of safety into education access as well.

Derek, a 24-year-old transgender man from Brooklyn first began transitioning during his junior year of high school. After coming out to administrators at his public New Jersey high school, he was told that the only conclusion they could come up with for fear of making other students or their parents uncomfortable was that he use the only single stall bathroom in the school, located on the first floor. While it wasn’t the ideal response, he agreed.

“I wasn’t trying to make a statement,” he said. “I just needed to transition.”

Derek (who asked Vocativ not use his last name) recalled that having to use this restroom was often a huge production. Given the fact that it was located in the nurses office, it was constantly in use by sick students.

“It was incredibly inconvenient,” he said, recalling a time when having to travel across the school and wait for a sick student to finish using the restroom during an important exam left him with only 20 minutes to complete it, rather than the 45 minutes the rest of the students in his class received.