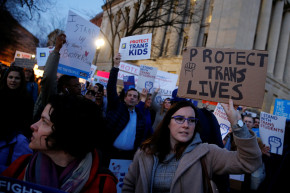 Twitter users are in numbers — and with outrage — to President Trump’s latest decision, to withdraw a set of guidelines originally enacted by the Obama administration that let transgender students to use the school bathrooms that match their gender identities.

From Thursday morning, when rumors of the rollback started making news (it was officially announced Thursday evening) to early Friday, nearly 300,000 tweets posted around the tag #ProtectTransKids. Posters urged moves to fight harassment, bullying, and discrimination, as the federal government hands over the responsibility for transgender policies to the states. Many of the tweets were meant to be reassuring messages for trans people.

No child should have to make this decision. #ProtectTransKids pic.twitter.com/1BoPI5xLjq

The "T" in #LGBT is just as important as the "L", the "G" and the "B". If you are anti-transgender, you are anti-LGBT. #ProtectTransKids

NO ONE should have to face anxiety or embarrassment using a school restroom. #ProtectTransKids

The Justice Department stated that the Obama administration’s guidelines were implemented “without due regard for the primary role of the states and local school districts in establishing educational policy.” There was reported dissent with in administration, with new Education Secretary Betsy DeVos initially opposing the ban, but ultimately Trump appears to have gotten everyone on board.

One of the more remarkable tweets in defense of transgender students came from Jackie Evancho, the 16-year-old girl who sang the national anthem at Donald Trump’s inauguration.

. @realDonaldTrump u gave me the honor 2 sing at your inauguration. Pls give me & my sis the honor 2 meet with u 2 talk #transgender rghts ❤

Evancho has a transgender sister. In an interview with ABC’s Good Morning America, she stated “I guess I just want to enlighten him on what my sister, I’ve seen her go through every single day in school and people just like her, what they deal with. The discrimination, it’s terrible.”