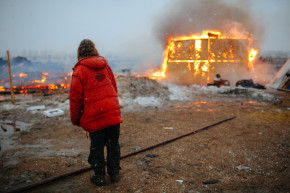 Protesters set fire to a structure at the Oceti Sakowin camp — Getty Images
By Jeff Andrews
Feb 22, 2017 at 3:21 PM ET

Several activists and media organizations broadcast Facebook Live feeds from a scene that is shaping up to be a bitter end to months-long resistance to the pipeline. As of 6 p.m. ET, thousands of people watched Facebook Live streams that showed protesters braving the snow, sleet and rain to make one last stand against what they see as desecration of the sacred land of the Standing Rock Sioux tribe. While violence appeared minimal, BuzzFeed News reported one man broke his hip while clashing with police on Highway 1806.

“Today is not going to be one of the proudest days for the state of North Dakota,” one protester declared in a Facebook Live video. “This is a stain on the history of North Dakota and America. This is the 21st century Trail of Tears.”

Once covered in tents and makeshift structures, Oceti Sakowin is now mostly empty, save for the garbage left behind by protesters who are already gone. One building burned in the background, with one video suggesting the protesters would rather burn it themselves than have law enforcement take it from them. Many veterans carried upside down American flags, while others unfurled a banner that read “Who are you serving and protecting?”

Aerial footage of the campsite captured by drone.

One of the most compelling videos was of aerial footage taken from a drone. It showed what’s left of the protesters’ camp in addition to the gathering of law enforcement to the north. A protester in another video claimed law enforcement had technology that could block Facebook Live feeds so that video of the actual raid doesn’t reach the internet. It also claimed that news media were being kept well outside of the camp for the same reason.

In the many Facebook groups dedicated to the #NoDAPL movement, protesters pledge to stand but not resist in an effort to keep the raid from getting violent. It’s unclear what methods law enforcement will use to clear the camp, but the protesters are pledging to keep their movement going even long after Wednesday’s deadline.

“You cannot arrest a movement,” one protester said.