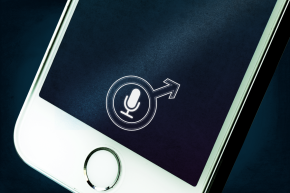 Where Are All The Male AI Voice Assistants?
By Alejandro Alba

Where Are All The Male AI Voice Assistants?

Apple's Siri is currently the only male voice assistant option

If you were to ask your device with an AI voice assistant a random question, what gender would respond to you? Female most likely, and that’s because only female artificial intelligence assistants have been developed.

Microsoft’s Cortana, Amazon’s Alexa, and Google’s Assistant all have female voices. Apple’s Siri also started as female only, but added a male voice option three years ago, even though the female voice is still the default. It might be easy to think that female AI voices have been the go-to because of sexism — lots of men in leadership and developer roles at Silicon Valley — and that may be at play, but there’s more to it.

Two studies recently cited by The Wall Street Journal show that men and women prefer a female voice assistant because they believe it’s more welcoming and understanding. However, they prefer to listen to a male voice on certain subjects.

Although those studies are somewhat old now, tech companies have concluded the same thing with their own research. While creating Cortana, for example, Microsoft’s team revealed that people still prefer a woman’s voice.

“The research shows that there are benefits and tradeoffs to either gender oriented position,” a Microsoft spokesperson told Vocativ. “We did extensive research and found there is a certain warmth to a female voice that is associated with helpfulness. We are going for a helpful digital assistant and we made the choice based on this research.”

Amazon also had similar market tests in which consumers preferred a female voice to talk back to them, according to WSJ, which is why it settled on Alexa — it was also an nod to Star Trek’s library of Alexander. Google on the other hand, didn’t assign a gender to the name of its voice AI with, it just called it “Google Assistant,” but it still has a recognizable female voice.

It’s still unclear when we’ll see more male voice assistants, but Microsoft told Vocativ that it’s “investigating the possibility.” Based on WSJ’s report, Google is also looking into the possibility of adding other options.

“We’re starting with a female voice, as it’s something we already had available via the Google voice search technology. We are thinking about how to expand beyond a female voice but have nothing to share at this time,” a Google spokesperson told Vocativ.

It’s important to give consumers options when it comes to robot voices because different cultures or demographics might have different preferences when it comes to personal assistants. Apple does a good job at letting people choice different languages, accents, and gender voices. You can have a female voice with a British accent or a male voice in a Spanish accent. The only other two robots that Vocativ found that have male voices are IBM’s Watson and the Domino’s app voice assistant. Then there’s Mark Zuckerberg’s personal AI voice assistant Jarvis, voiced by actor Morgan Freeman, but that one is a bit exclusive to billionaires.