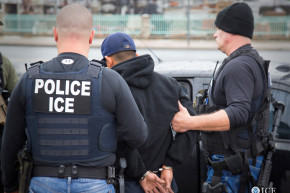 The Trump administration’s recent orders widely expanding the number of immigrants subject to deportation have many fearing any and all police encounters. In order to stay ahead of police and immigration authority movements, some are turning to private Facebook groups to share the locations of checkpoints and arrests in their areas, as well as provide useful advice for those trying to stay on the right side of the law.

Vocativ found several online groups operating in areas of California, Texas, North Carolina, New York, Illinois, Tennessee, and Georgia. Users in these groups have shared information including whether there are checkpoints on local roads; photos and locations of pulled over police cars in certain areas; and advice on encounters with cops and U.S. Immigrations and Customs Enforcement (ICE). In one group, Retenes California, which counts more than 115,000 members on Facebook, users and administrators have recently posted tips for how to properly follow driving safety rules to avoid getting pulled over by the police.

While some of these Facebook groups have existed for some time, many have been formed in response to President Donald Trump taking office. And the groups appear to be seeing spikes in membership after Trump announced a host of new and expanded policies that allow for more, and speedier, deportations. For example, one group dedicated to locating immigration checkpoints in El Paso, Texas, added nearly 2,000 members since it was founded last week, on February 16. Facebook searches for the words “redadas (raids),” “ICE alerta (ICE alert),” or “retenes (checkpoints)” turn up dozens of similar groups.

“Good morning, remember to share what happens in our surroundings!! #thanks,” the administrator of the El Paso group recently wrote in Spanish. In an earlier post, the admin urged others not to report the group for deletion.

One innovation that has emerged in a few of these groups is the use of a walkie-talkie application called Zello. The app, created in Austin, Texas, has been known as a tool used by ISIS fighters to share extremist sermons and other information using as little bandwidth and battery power as possible. Now members of a California-based checkpoint group have created a channel on Zello to conduct audio broadcasts of possible checkpoint locations in real time. The group shared a video on Facebook about joining a specific Zello channel:

While these groups may be providing valuable information for undocumented immigrants trying to stay in the U.S., social media generally seems to have contributed to widespread false rumors regarding ICE raids around the country. For their part, ICE has flatly denied using “indiscriminate” checkpoints.