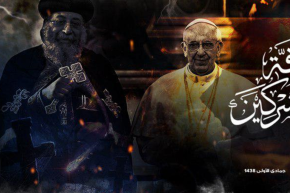 Issuing a call to ISIS supporters to attack Coptic Christian churches in Egypt, a pro-ISIS Egyptian channel on Telegram has released a list of targeted religious buildings in each province and across the country. The channel, called “Egypt’s Apostate Watch” urged its followers to attack the named churches and sites with explosives, guns or knives, while another Telegram channel supporting the terror group claimed there were plans afoot to launch attacks against Christian churches and their ‘interests’ in Egypt.

ISIS militants in Egypt recently released a 20-minute video calling for the killing of Coptic Christians. It purported to describe the outsized role ISIS believes Christians play in influencing Egyptian politics and the economy.

In the video, ISIS showed for the first time a man named Abdullah al-Masri, who the group claimed was responsible for the bombing of a Coptic Christian cathedral in Cairo that killed 25 people in December. Appearing masked and holding a rifle, the man promised to “liberate Cairo.”

At the end of the video, ISIS addresses Christians in Egypt. “You are our first target and favorite prey,” the video said.