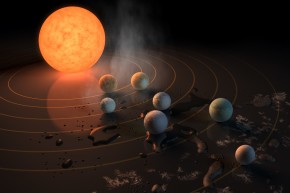 It sounds like something out of a science fiction novel, and a particularly pulpy and preposterous one at that. A mere 40 light-years away, there’s a solar system where seven Earth-like planets orbit a tiny dwarf star, all at a fraction of the distance between our world and the sun. As NASA announced on Wednesday, at least three of the planets could have oceans of liquid water, and it’s entirely possible the other four do as well, meaning this solar system could theoretically be teeming with life.

Every new exoplanet discovery lets us better understand our place in the cosmos. As recently as 25 years ago, planets orbiting other stars were just a theoretical possibility, making it plausible to suggest we might be all alone in the universe. A flurry of discoveries has since revealed our galaxy is likely home to hundreds of billions of planets, with at least 10 billion of them potentially habitable worlds. But this system around the dwarf star TRAPPIST-1 represents a whole other level of ridiculous when it comes to Earth-like planets.

Six of the seven planets are bunched closely together around the weak light of their star, which is only slightly bigger than Jupiter. As explained in a paper published in Nature, researchers followed up on initial observations from the ground-based telescopes at the European Southern Observatory with more in-depth study by NASA’s Spitzer Space Telescope. It found that six of the planets take between 1.5 and 13 days to orbit their star, and even the more distant planet takes just 73 days, shorter than Mercury’s orbit around the sun.

That would mean anyone standing on the surface of one of these worlds would have an unbelievable view. The other planets could appear even bigger than the moon does in our night sky. If intelligent life ever evolved on one of these planets and developed space travel, exploring their solar system would be an absolute breeze. Getting from one planet to another would be a matter of a few days’ travel, rather than the months it would take us to get to even nearby worlds like Venus and Mars.

Artist's conception of the surface of one of the planets.

Five of the planets appear to be roughly the same size as Earth, while the other two are a bit smaller, about halfway between our planet and Mars. Astronomers have been able to confirm that the six innermost planets all have masses similar to that of Earth, meaning they are probably rocky, potentially life-supporting worlds — it’s very possible this is also the case for the seventh planet, but that’s not certain yet.

The fact that all the planets are bunched so close together in their orbits likely leaves them tidally locked, meaning one side of each planet always faces the star. Though that does mean the star-facing sides of the planets would be much hotter than the dark sides, there would still be areas that could support atmospheres and water.

The three planets closest to the star might suffer the same kind of runaway greenhouse gas effect that has left Venus a hellish, superheated wasteland, but their situations might be a bit better than on our nearest planetary neighbor — the astronomers believe there would be at least a few regions where liquid water could exist. The next three planets are in even better shape, as they could all be home to full-fledged oceans. The most distant planet is again mysterious because of more limited observations, but it could potentially have water on its surface if the world has enough internal heat to avoid going into deep freeze.

We will soon get a chance to learn a lot more about these planets, as the James Webb Space Telescope, NASA’s upcoming successor to Hubble, will be able to detect what makes up the atmosphere of each of the planets and what heat each world emits. Astronomers should then be able to determine if any or all the planets have water and, with it, the potential for life.

And here’s the thing: The odds are way, way, way better that life would at some point evolve in this solar system than it ever would in ours. A low-energy dwarf star like TRAPPIST-1 will burn for about a thousand times longer than the 10 billion years our sun has got. When a solar system has 10 trillion years — about 700 times the current age of the universe — life is quite possibly a matter of when, not if.