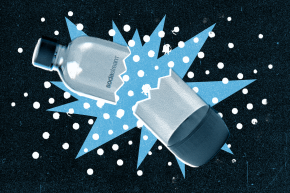 Carbonate at your own risk

Over 50,000 SodaStream bottles have been recalled for their potential to pull a Galaxy Note 7 — a.k.a. explode and injure people.

The SodaStream, a product that allows users to create their own flavored sodas and seltzers, requires carbon dioxide cylinders to carbonate the water. The company itself initialized the recall, which was then issued by the U.S. Consumer Product Safety Commission on Tuesday with the warning that “the bottles can burst under pressure.” According to SodaStream, the reason for this reaction is a manufacturing defect. Roughly 58,000 units sold within the U.S. and Canada may be affected by this defect.

The notice states that the recalled one liter bottles used to hold the beverages are blue tinted and are labeled “dishwasher safe” with an expiration date of April 2020.

No incidents or injuries associated with the defective product have been reported so far. While a cursory search on YouTube reveals that people have complained of exploding SodaStreams in the past, these instances have been typically associated with admitted user errors.

Those who have purchased one of these products are asked to stop using it immediately and file for a refund.