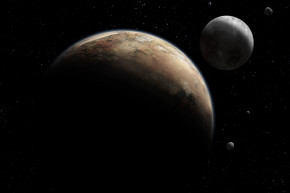 Pluto partisans are basically waving at the sky and saying, 'they're all planets now'

Ever since Pluto was demoted to dwarf planet in 2006, restoring the former ninth planet to its past glory has been a cause célèbre for legions of Pluto fans. But perhaps nobody has quite as personal a stake in Pluto’s planet status as Alan Stern, leader of NASA’s New Horizons mission to Pluto, who has argued it’s harder to get the public to care about scientific exploration of a non-planet.

That’s why he and several colleagues have proposed a new definition for what a planet is, one they argue is more straightforward and intuitive than the International Astronomical Union’s current, Pluto-disqualifying one. Forget eight planets, or even nine: Say hello to at least 110 planets, including the moon.

The current IAU definition of a planet has three parts: It has to orbit the Sun, it has to be big enough for gravity to form it into a round shape, and it has to have cleared its orbit of other objects of comparable size. Pluto meets the first two of those criteria, but its home in the bustling Kuiper Belt beyond Neptune means it fails number three. The new definition eliminates two of those criteria, with the authors suggesting a planet is any round object in space smaller than star. That’s it. It doesn’t matter how crowded the object’s neighborhood is, or even whether it orbits the sun. If it’s big enough to be round, then it’s a planet. That gets Pluto back into the club, along with other dwarf planets like Ceres and Eris, and moons including our own, Jupiter’s Europa, and Pluto’s Charon.

While the idea of making Earth’s moon into a planet sounds odd, there’s plenty of precedent for it. After all, the moon was considered a planet for far longer than we have even known Pluto exists. Along with the Sun and the other five classical planets, it was considered a planet until at least the age of Copernicus, after which the determining factor for a planet became whether it orbited the sun. That new definition held until the middle of the 19th century, when the discovery of several dozen objects in what we now know as the asteroid belt forced astronomers to add a size component for planets. That revision worked for another 150 or so years, until the discovery of multiple Pluto-sized planets beyond Neptune led the IAU to add the bit about clearing one’s orbital neighborhood. Perhaps because humans have spent millennia only knowing about a handful of planets, we keep redefining planet to keep the number of them safely below ten.

This new proposal would do away with that model forever. As the astronomers point out in their proposal, a planet’s status would now be determined entirely by its internal geology — whether it’s round, basically — instead of external factors like its particular location in the solar system. That’s arguably quite a bit cleaner than the current IAU definition, as objects have to get bigger and bigger to clear their neighborhood and thus count as planets the further they are from the sun. In fact, an object as big as the Earth wouldn’t count as a planet if it happened to be in the Kuiper Belt.

This new plan would change the planets in solar system from a list schoolchildren can learn by heart to something more like the periodic table of elements, where people are familiar with a dozen or so of the most important ones but only think of the others if playing something like Jeopardy. The focus would likely remain on the biggest planets, the four gas giant planets and the four rocky planets we’re most familiar with, but this would just erase the distinction between those two types, dwarf planets like Pluto, and moon planets like, well, the moon. A solar system with 110 planets and counting would take some getting used to, but that sure sounds like a solar system worth exploring. Which, after all, is exactly the point of this proposed definition.