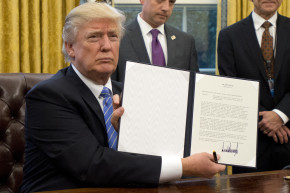 U.S. CyberCorps, ROTC For Hackers, In Disarray In Trump Admin
By Kevin Collier

U.S. CyberCorps, ROTC For Hackers, In Disarray In Trump Admin

For decades, the scholarship program has funneled elite college students into gov cybersecurity work. But now recruits don't know if they can get a job

President Trump with Executive Order including a US Govt. hire freeze — Getty Images
By Kevin Collier
Feb 22, 2017 at 11:39 AM ET

A government scholarship program that puts talented students to work protecting the government from hackers, in place since the Clinton administration, has been in a state of confusion since President Trump took office, several students say.

CyberCorps is seen as a major tool to fight that employee attrition, as it gives elite students a full year of scholarship for every year they pledge to work in the government. The program is vast, with 69 participating American colleges and universities and almost 3,000 current scholarship recipients. Its graduates go on to work in the Department of Homeland Security, FBI, NSA, as well as smaller federal agencies like the Department of Agriculture. A handful of them take state or municipal jobs.

But four students now on scholarship with the program, all of whom asked to not be identified by name or school to avoid possible retaliation, told Vocativ that, in light of Trump’s hiring freeze, they had no idea if they could still get jobs in the new administration. They also said the government hasn’t responded to their multiple requests for clarification. That’s particularly troubling, they said, because the terms of their scholarship says they’re forced to pay back the value of their scholarships if they don’t take a government job.

“That’s the question we’ve been asking: What exactly we’re supposed to do. It hasn’t been made clear to us whether our obligation to the government is lifted, or deferred, or if we can defer it for a number of years,” one student said.

Another student said that the Office of Personnel Management, which oversees hiring and human resources duties for the federal government, has ignored them.

“I’ve called OPM many times. I’ve called the manager of our program. So far, I’ve been able to get one response: That they’re still discussing it internally, that we should wait. It’s been a strange month or so,” the student said.

At issue is Trump’s Executive Order, signed almost immediately after he took office, that indefinitely freezes nearly all new federal job hires. There are a handful listed exceptions, but cybersecurity jobs aren’t among them.

“I wish there was a little more nuance to the executive orders that were coming out,” the second student said. “It’s been concerning for us to see that, on the one hand, you have the administration saying that cybersecurity is essential, we need cybersecurity people, and on the other hand freezing cybersecurity hiring. It’s been two messages coming out of the government in this new administration.”

“Right after the election of Donald Trump, I knew the hiring freeze was one of his platform ideas,” a third student said. “I was hoping that he was full of a lot of hot air. And then, obviously, he was elected, sworn into office, and the executive orders started to be issued.”

Two of the students said they’re set to graduate this spring and had lined up federal jobs that they now don’t know if they can take.

“Especially since OPM heads our program, I feel like they’ve honestly forgotten about us and put us in a really hard place,” the third student said. “I had an interview with an agency I thought would be really cool to work for. However, because of the freeze, the paperwork or whatever is just tied up and they really don’t know what to do.”

Officially, the government’s stance is that there is no interruption to the CyberCorps program, according to Any Collins, a spokesperson for the National Science Foundation, the agency that awards the program’s scholarships.

“No changes have been made to this or any NSF program. The merit review process remains in place and NSF is operating without interruption,” Collins said in a statement to Vocativ. Her statement, however, didn’t address Vocativ’s emailed question of what happens to students who had set up jobs with agencies that suddenly are now unable to hire them.

CyberCorps students are far from the only prospective cybersecurity experts who won’t fill much-needed government vacancies. A number of current and former federal government executives who oversee cybersecurity and computer science hiring have said that Trump’s hiring freeze makes a hard job significantly harder. The hiring process for such employees can often take nearly a year or longer, they say, and they depend on a steady, uninterrupted “pipeline” to stay staffed.

A shortage of cybersecurity workers could cause agencies to overlook vulnerabilities like that which enabled the disastrous OPM hack of 2015, which exposed the Social Security Numbers of some 21.5 million government employees and sensitive personnel files of undercover federal agents. Government cybersecurity executives, like former EPA Chief Information Officer Ann Dunkin, have previously told Vocativ that the hiring freeze causes a shortage of key workers.

“The federal government is trying very, very hard, and has been making some really great progress” in hiring tech and cybersecurity workers, Dunkin said. “And then you basically put the brakes on it, and potentially people start going backwards.”