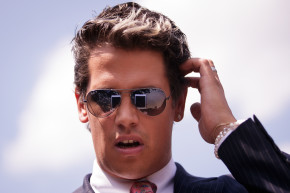 Milo Yiannopoulos’ Fall From Grace Is Exactly What He Wanted

As someone of Greek descent, Milo Yiannopoulos should know better than anyone else the meaning of the word “hubris.” If not, he can look at his own current situation as an example. The man who built his career on the backs of an internet outrage mob of trolls mobilized by hit pieces about their perceived opponents’ shameful pasts is now facing an internet outrage mob against himself, thanks to his own shameful past.

It’s almost impossible to conceive of this now, but when Yiannopoulos joined Breitbart in 2014, he was a little-known columnist whose biggest claim to fame in his native England was being tech blogger for the Telegraph until he was fired, and then as the founder and editor of a tech news site called The Kernel, which was beset with financial problems until, for whatever reason, Daily Dot bought it in 2014. Then he was hired by Breitbart for its London vertical. There, he was initially dismissive of gamers, once calling violent video games “the last resort of the frustrated beta male” while decrying Grand Theft Auto for allowing hacks that let players rape each other — some of whom, he fretted, “could be as young as 12 or 13.” Rockstar Games, which developed GTA, had the kind of “brazen, sociopathic, adolescent attitude” that allowed these kinds of bad things to happen, Yiannopoulos said in an article in August 2014.

That all changed a month later in September 2014, when he wrote a long feature about “feminist bullies” who were “tearing the video game industry apart.” Yiannopoulos was heralded by GamerGate as a truth-telling hero. He wrote several more columns in quick succession. By November, he was writing that Grand Theft Auto was good, and players should “carry on shagging, slugging and slaughtering whores.” The audience he was playing to may not have been the one he initially wanted, but it was the one he got, so he built on it.

Yiannopoulos quickly set about trying to “expose” ardent critics of his new fans. Shanley Kane, former Woman in Tech turned feminism and diversity advocate, used to be a racist, according to a famous racist she once dated. Kane said she was “playing along” and the comments were meant to be satirical. In a follow-up, Yiannopoulos took great delight in Kane’s perceived downfall, as engineered by Yiannopoulos.

“Kane’s support appeared to be drying up rapidly, her reputation as a hero of progressivism shattered and her track record as a champion of the underprivileged severely damaged,” he wrote. “Any ability to effect change for women and minorities in the technology industry is likely a thing of the past.”

Randi Harper, who created a program that automatically blocked people identified as harassers or GamerGaters on Twitter, was the subject of a two-part profile that claimed that, in an undated online chat, she suggested that the way to get a rent controlled apartment was to date someone with one, move in with him, and then kick him out of it. Also, in 2004, she was arrested for failure to appear in court. In a follow-up, Yiannopoulos combed through Harper’s past blogs and chat transcripts from more than a decade ago to add to his claims. He had “set the record straight” on Harper, he concluded, and she had “quite a lot to answer for.”

And then there’s Yiannopoulos’s hit piece on Sarah Nyberg, a prominent activist and GamerGate critic who he believed he had exposed as a pedophile. About 10 years ago, he claimed, Nyberg said in chat rooms that she was a pedophile who was attracted to little girls, including a family member. Nyberg said in blog post that she made “gross and disturbing” comments at a dark and lonely time in her life when she was trying to fit in with the only people she thought were her friends.

From the GamerGate cause, Yiannopoulos latched onto the alt-right, gaining him even greater fame and attention. Now he was “MILO,” the subject of profiles about how charming he was while he said things that were politically incorrect. Now he had his own tech vertical on Breitbart, where he wrote as much about his own exploits as it did about all those Social Justice Warrior hypocrites who claimed they were the victims of cyberbullies when it was they who were the real cyberbullies. Now he was too hot for Twitter. Now he was wearing quasi-military designer clothes, using a personal trainer, and posing for glamor shots that showed off his new platinum blond hair. Now he was calling Trump his “daddy” and helping him win the election. Now he was on a college tour, torturing liberal “snowflakes” who couldn’t handle what he had to say about how the real world worked. Now he had a six-figure book deal. Now he was the keynote speaker at CPAC. His ever-growing audience celebrated every move. Conservatives, either agreeing with him or simply trying to look hip and cool, flocked to his message, defending his misogynist, racist, and transphobic rhetoric as a welcome and refreshing change from the oppressive politically correct message of militant SJWs.

But then Yiannopoulos made a mistake. One that should be familiar to him, considering it was once his beat.

Here is a longer cut where Milo Yiannopoulos says that he “is advocating” for legal sex between 13 year olds! & older men. #CPAC2017 pic.twitter.com/1fiuv7TSKs

And that was the straw that broke the right-wing camel’s back. Following a tremendous internet outcry, Yiannopoulos was dropped by CPAC, lost his book deal, and, after Breitbart’s editor-in-chief said Yiannopoulos’s comments were “indefensible,” resigned from the site that created him. Yiannopoulos made a rare semi-apology, trying to explain it away as “gallows humor” and gay parlance that was misunderstood by the straight community. But it was too late.

Jokes about pedophilia will never be looked on favorably, but there’s one prominent columnist who shared his special outrage for them with a large and hungry audience, and demanded the ruination of the careers and lives of those who made them. After Yiannopoulos published his “exposé” of Nyberg, he repeatedly expressed frustration that Nyberg’s community didn’t summarily drop her, and tried to shame those who defended her. His fans took up that cause; other alt-right outlets did, too. Nyberg’s story was one of several that Yiannopoulos cited as proof that, rather than being an advocate for pedophiles, he was one of their most ardent critics who worked to expose them. Yes, Nyberg, who said she’d done very much the same thing Yiannopoulos was accused of now: making an outrageous claim as a joke that wasn’t funny but also wasn’t meant to be serious, and which was being brought up well after the fact by enemies who wanted to destroy her.

“Progressives who got fired up about whether green and purple was a ‘rapey’ color scheme were suddenly fine with discussion of incestuous pedophilia from a 22-year-old in a chat room full of teenagers,” Yiannopoulos once wrote. “It has been a somewhat grotesque spectacle to watch … Twenty-first century pedophiles aren’t hanging around school gates with candy: they’re lurking online.” Too true, too true.

Speaking of grotesque spectacles: “They canceled my book,” Yiannopoulos pity-posted on Facebook on Monday. “I’ve gone through worse. This will not defeat me.”

His comments mirrored those of his hit piece victims who vowed that as bad as Yiannopoulos and his army were, they would not be silenced by them. Victims who had a lower profile and fewer resources available to them to weather the storm Yiannopoulos created to build his own career, and which he’s now very upset to be on the receiving end of.

Yiannopoulos ended a column criticizing the left-wing for “defending” pedophiles by warning that their efforts to write off and even accept pedophilia would be fought at every turn: “Radical leftists may be planning to make pedophilia another front in their civil rights battles, but it won’t happen without a fight. Nor should it.”

The fight Yiannopoulos demanded is here now, and it’s against another prominent internet personality who made terrible comments about pedophilia that he apologized for only after he was caught, claiming they were made in jest. The fanbase that Yiannopoulos spent years cultivating once took up his calls to punish others for their comments about pedophilia; they now defend Yiannopoulos for doing the same. But the people who pay Yiannopoulos’s bills and give him the platform from which to espouse his views aren’t taking up his cause. Headlines far and wide have announced Yiannopoulos’s pedophilia apologist “jokes.” His high profile supporters are abandoning him. If Yiannopoulos’s career rebounds from this, he will be the beneficiary of a too-forgiving culture he frequently and vociferously rejected.

If it had happened to anyone else, Yiannopoulos would be leading the charge. But he created this monster, and now he can only watch it eat him.

Correction: A previous version of this article said that Sarah Nyberg admitted to the chat room comments Yiannopoulos accused her of making. While Nyberg said she made disturbing comments in a chat room, she never said she made the ones attributed to her. Vocativ regrets the error.